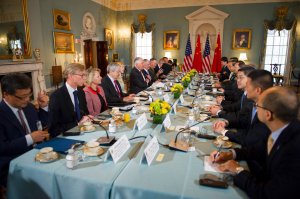 WASHINGTON (AP) — The U.S. pushed China Wednesday to rein in companies that deal with North Korea after President Donald Trump tweeted ahead of the high-level talks that Beijing’s efforts to sway its wayward ally weren’t working.

Trump has been counting on China to use its economic leverage with the government of North Korean leader Kim Jong Un as American concern grows over the North’s acceleration toward having a nuclear missile that can strike the U.S. mainland.

The security talks between U.S. and Chinese diplomats and defense chiefs are occurring amid outrage in Washington over the death of Otto Warmbier days after the American student was released from imprisonment in North Korea in a coma.

U.S. lawmakers are pressing for a tough response against Pyongyang over its treatment of the 22-year-old university student, who was accused of trying to steal a propaganda banner while visiting with a tour group and was convicted of subversion.

Trump has praised Chinese President Xi Jinping for trying to contain North Korea, which counts on China for 90 percent of its trade, but the effort has delivered few results. North Korea hasn’t conducted a nuclear test explosion as feared earlier this year but has kept up its rapid pace of missile launches.

“While I greatly appreciate the efforts of President Xi & China to help with North Korea, it has not worked out. At least I know China tried!” Trump tweeted Tuesday.

Susan Thornton, the senior U.S. diplomat for East Asia, said North Korea would get “top billing.” She said the U.S. would be consulting with China on implementation of U.N. Security Council resolutions that are intended to restrict revenue and technology for the North’s nuclear and missile programs.

The discussions replace a strategic and economic dialogue held annually under the Obama administration. Those talks rarely produced significant results. This year’s edition separates out the security aspects.

Thornton said the talks would also cover the South China Sea, where Beijing’s island-building and construction of possible military facilities have rattled neighbors and caused tension with Washington; U.S.-Chinese military cooperation to reduce risk of conflict; and efforts to defeat the Islamic State group.

Divisive trade issues will be dealt with at a later date.

Like past presidents, Trump is finding the U.S. has limited scope for punishing North Korea, particularly over the arrest of U.S. citizens.

His administration is considering a ban on Americans visiting North Korea. That would only slightly add to the North’s isolation and loss of revenue. The route to inflicting significant economic pain on Kim’s government remains through China.

Washington has one threat it can use with Beijing: The possibility of “secondary” sanctions that go after Chinese companies doing business in North Korea. Such a move risks fraying relations between the world’s two biggest economies.

The Chinese state-run Global Times warned in an editorial that if Washington imposes sanctions against Chinese enterprises “it will lead to grave friction between China and the U.S.”