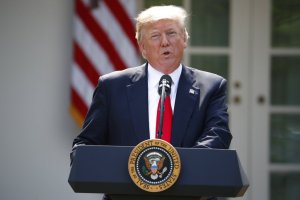 President Donald Trump speaks about the U.S. role in the Paris climate change accord, Thursday, June 1, 2017, in the Rose Garden of the White House in Washington. (AP Photo/Pablo Martinez Monsivais)

WASHINGTON (AP) — President Donald Trump declared Thursday he was pulling the U.S. from the landmark Paris climate agreement, striking a major blow to worldwide efforts to combat global warming and distancing the country from its closest allies abroad. Framing his decision as “a reassertion of America’s sovereignty,” Trump said he was “elected to represent the citizens of Pittsburgh, not Paris.”

He said the U.S. could try to re-enter the deal under more favorable terms or work to establish “an entirely new transaction.” But he indicated that was hardly a priority. “If we can, great. If we can’t, that’s fine,” he said.

Scientists say Earth is likely to reach more dangerous levels of warming sooner as a result of the president’s decision because America’s pollution contributes so much to rising temperatures. Calculations suggest withdrawal could result in emissions of up to 3 billion tons of additional carbon dioxide a year — enough to melt ice sheets faster, raise seas higher and trigger more extreme weather.

By abandoning the world’s chief effort to slow the tide of planetary warming, Trump was fulfilling a top campaign pledge after weeks of building up suspense over his decision.

The White House indicated it would follow the lengthy exit process outlined in the deal. That means the U.S. would remain in the agreement, at least formally, for another three-and-a-half years, ensuring the issue remains alive in the next presidential election.

However, Trump declared, emphasizing every word: “As of today, the United States will cease all implementation of the nonbinding Paris accord.”

He is breaking from many of America’s staunchest allies, who have expressed alarm about the decision. Several of his top aides also opposed the action, including his daughter Ivanka Trump.

Under former President Barack Obama, the U.S. had agreed under the accord to reduce polluting emissions by more than a quarter below 2005 levels by 2025. But the national targets are voluntary, leaving room for the U.S. and the nearly 200 other countries in the agreement to alter their commitments.

The leaders of France, Germany and Italy joined to “note with regret” the Trump decision and express doubts about any change in the accord.

“We deem the momentum generated in Paris in December 2015 irreversible, and we firmly believe that the Paris Agreement cannot be renegotiated, since it is a vital instrument for our planet, societies and economies,” wrote French President Emmanuel Macron, German Chancellor Angela Merkel and Italian Premier Paolo Gentiloni.

The White House said Trump spoke with the leaders of Germany, France, Canada and Britain Thursday to explain his decision and reassured them that the U.S. is committed to the trans-Atlantic alliance and “robust efforts to protect the environment.”

At home, the U.S. Conference of Mayors strongly opposed the decision and said the nation’s mayors will continue efforts to reduce greenhouse gas emissions blamed for global warming.

Responding to Trump’s pointing to his city, Pittsburgh Mayor Bill Peduto called the decision “disastrous for our planet, for cities such as Pittsburgh,” and a step that “has made America weaker and the world less safe.”

In a rare statement on his successor’s policies, Obama said: “Even in the absence of American leadership; even as this administration joins a small handful of nations that reject the future, I’m confident that our states, cities, and businesses will step up and do even more to lead the way, and help protect for future generations the one planet we’ve got.”

Business leaders, normally strong supporters of Republican initiatives, had vigorously appealed to Trump not to abandon the agreement. Many economists believe the accord would likely help create about as many jobs in renewable energy as it might cost in polluting industries.

The president, however, argued the agreement had disadvantaged the U.S. “to the exclusive benefit of other countries,” leaving American businesses and taxpayers to absorb the cost.

The immediate impact of Trump’s move could be largely symbolic. The White House said the U.S. will stop contributing to the United Nations Green Climate Fund and will stop reporting carbon data as required by the Paris accord, although domestic regulations require that reporting anyway. The decision has no direct impact on major U.S. regulations on power plants and car rules currently aimed at reducing carbon emissions, although those are currently under review by Trump as well.

“This agreement is less about the climate and more about other countries gaining a financial advantage over the United States,” Trump said.

Congressional Republicans applauded the decision, with Senate Majority Leader Mitch McConnell of Kentucky saying Trump had “put families and jobs ahead of left-wing ideology and should be commended.”

But House Democratic leader Nancy Pelosi of California called it “a stunning abdication of American leadership and a grave threat to our planet’s future.”

Trump spoke from the White House Rose Garden on a warm, sunny day. Seated in the front row were aides who had advocated for the withdrawal, including EPA administrator Scott Pruitt and chief strategist Steve Bannon. During Trump’s speech, the faint sounds of protesters could be heard in the distance banging drums.

Secretary of State Rex Tillerson, who had urged Trump to stay in the Paris deal, did not attend the ceremony, nor did Trump’s son-in-law Jared Kushner and his wife, Ivanka Trump, both close advisers to the president who supported staying in the agreement. A White House official said the couple instead attended service at synagogue for the Jewish holiday of Shavuot.

Business investors seemed pleased, with stock prices, already up for the day, bumping higher as he spoke and the Dow Jones industrial average rising 135 points for the day.

As for the mechanics of withdrawal, international treaties have a four-year cooling off period from the time they go into effect. Trump promised to stop implementation of the “non-binding” parts of the deal immediately.

The U.S. is the world’s second-largest emitter of carbon, following only China. Beijing, however, has reaffirmed its commitment to meeting its targets under the Paris accord, recently canceling construction of about 100 coal-fired power plants and investing billions in massive wind and solar projects.

White House aides have been divided on the question of staying or leaving the accord and had been deliberating on “caveats in the language” as late as Wednesday, one official said. But Trump’s statement was clear and direct.

So was opposition from environmental groups.

“Generations from now, Americans will look back at Donald Trump’s decision to leave the Paris Agreement as one of the most ignorant and dangerous actions ever taken by any president,” Sierra Club executive director Michael Brune said in a statement.