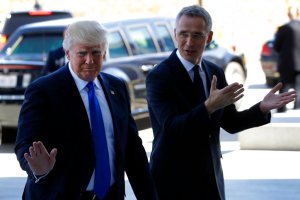 NATO Secretary General Jens Stoltenberg, right, greets US President Donald Trump during a NATO summit of heads of state and government in Brussels on Thursday, May 25, 2017. US President Donald Trump and other NATO heads of state and government on Thursday will inaugurate the new headquarters as well as participating in an official working dinner. (AP Photo/Matt Dunham)

The 27 other leaders looked on in awkward silence as Trump suggested most NATO countries were freeloaders not paying their share for military protection. The other leaders are divided over his spending demands, as well as over how much intelligence to share with Trump’s troubled administration.

“Twenty-three of the 28 nations are still not paying what they should be paying and what they’re supposed to be paying for their defense,” Trump said. “This is not fair to the people and the taxpayers of the United States.”

But the threat of Islamic extremism remained a uniting theme as the specter of Monday’s Manchester concert bombing loomed over Thursday’s summit at the alliance’s new headquarters in Brussels.

“That attack shows why it’s important for the international community and NATO to do more about the fight against terrorism,” British Prime Minister Theresa May said upon arrival.

NATO’s chief affirmed that the alliance would join the international coalition fighting the Islamic State group, but will not wage direct war against the extremists.

Secretary-General Jens Stoltenberg said that joining the U.S.-led anti-Islamic State coalition “will send a strong political message of NATO’s commitment to the fight against terrorism and also improve our coordination within the coalition.”

But he underlined that “it does not mean that NATO will engage in combat operations.”

All 28 NATO allies are individual members of the 68-nation anti-IS coalition. Some, notably France and Germany, have feared that NATO officially joining it might upset decision-making within the coalition or alienate Middle East countries taking part.

Yet NATO leaders are keen to show that the alliance born in the Cold War is responding to today’s security threats as they meet in Brussels. Trump has questioned its relevance and pushed members to do more to defend themselves.

As part of its efforts to respond to Trump’s demand to do more to fight terrorism, NATO will also set up a counter-terrorism intelligence cell to improve information-sharing.

It will notably focus on so-called foreign fighters who travel from Europe to train or fight with extremists in Iraq and Syria.

After a working dinner at Thursday’s summit, the leaders are also set to announce the appointment of an anti-terror coordinator to oversee their efforts, and increase the number of flight hours of a surveillance plane watching the skies over northern Iraq and Syria.

Another big item on the NATO agenda is Trump’s challenge to other countries to increase their military spending. German Chancellor Angela Merkel said that NATO leaders will confirm a decision from 2011 increasing the amount member countries are expected to spend on defense to 2 percent of their gross domestic product by 2024.

Leaders also will agree to submit annual action plans laying out how they plan to meet NATO’s spending goal. The plans would also describe what kind of military equipment they intend to invest in, and how much they are contributing to NATO operations.

Merkel told reporters she is pleased that NATO spending plans will also take into account military equipment and contributions to alliance operations.

To meet the 2 percent guideline, Germany would have to virtually double its military budget, spending more money on defense than Russia.

But in remarks that humiliated other leaders, Trump said that “NATO members must finally contribute their fair share and meet their financial obligations.” He added, “Many of these nations owe massive amounts of money from past years.”

Meanwhile a growing row between the U.S. and Britain over intelligence-sharing clouded the NATO meetings, after leaked photos from the Manchester bomb scene appeared in The New York Times. Trump has also been accused of sharing sensitive information supplied by Israel with top Russian diplomats.

May said that when she sees Trump at the summit she will stress “that intelligence that is shared between law enforcement agencies must remain secure.”

The U.S.-British defense and security partnership “is built on trust. And part of that trust is knowing that intelligence can be shared confidently.”

The NATO summit began with a solemn ceremony inaugurating two monuments at the new headquarters: one with two sections of the Berlin Wall that divided the German city until 1989, and another formed from a piece of World Trade Center 1, a steel beam from the 107th floor of one of the towers downed by al-Qaida extremists on Sept. 11, 2001.

It’s a reminder of NATO’s commitment to its collective defense clause — so-called Article 5 — which commits allies to defend any of the 28 members that come under attack. It has only ever been activated once, after 9/11.