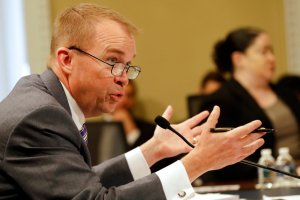 Mulvaney told the House Budget Committee that he went “line by line” through the federal budget and asked “Can we justify this to the folks who are actually paying for it?”

Panel Democrats charged that Trump’s cuts would rip apart the social safety net. Rep. Pramila Jayapal, D-Wash., told Mulvaney that cuts to food stamps, payments to the disabled, and other programs are “astonishing and frankly immoral.”

“This budget starts by taking away health care, then food, then housing, then education, then job opportunities,” Jayapal said.

Trump’s budget keeps to his campaign pledge to leave Medicare and Social Security pension benefits alone and contains spending increases for the military and veterans, but it treats most of the rest of the government as fair game. It foresees an overhaul of the tax code, which analysts say could direct most of its benefits to upper-income earners.

Mulvaney also told the panel that “it’ll be very difficult” to balance the budget in future proposal without cutting back the growth of Medicare and Social Security — the big retirement programs that Trump left alone in this year’s effort.

The plan, Trump’s first as president, combines $4.1 trillion for the upcoming 2018 fiscal year with a promise to bring the budget back into balance in 10 years, relying on aggressive spending cuts, a surge in economic growth — and a $2 trillion-plus accounting gimmick.

Trump’s budget is simply a proposal. There’s little appetite among Capitol Hill Republicans for a genuine effort to balance the budget; GOP lawmakers this year are instead pressing to rewrite the tax code and forge a spending deal with Democrats that would permit higher military spending and restore Trump proposals to cut domestic agencies and foreign aid.

Mulvaney, a former tea party congressman, is the driving force behind the Trump budget plan, winning the president’s approval for big cuts to benefit programs whose budgets are essentially on autopilot.

Food stamp cuts would drive millions from the program, while a wave of Medicaid cuts — on top of more than $800 billion in the House-passed health care bill — could deny nursing home care to millions of elderly poor people. It would also force some people on Social Security’s disability program back into the workforce.

Other cuts in Trump’s budget include $63 billion in cuts to pension benefits for federal workers by eliminating cost-of-living adjustments for most workers and requiring employees to make higher contributions. In agriculture, the proposed budget would limit subsidies to farmers, including for purchasing crop insurance, a move already attacked by farm state lawmakers.

The budget does feature a handful of domestic initiatives, including a six-week paid parental leave program championed by Trump’s daughter, Ivanka, that would be designed and financed by the states through cuts to unemployment insurance. Some $200 billion in federal infrastructure investments are promised to leverage another $800 billion in private investment, though the idea has yet to get much traction.

Trump’s balanced-budget goal depends not only on the growth projections that most economists view as overly optimistic but also a variety of accounting gimmicks, including an almost $600 billion peace dividend from winding down overseas military operations and “double counting” $2.1 trillion in revenues from economic growth — using them to both pay for tax cuts and bring down the deficit.

“This budget relies on absurd economic projections and pretend revenues that no credible economist would validate,” Jayapal said. “It provides no real information on “tax reform” other than to claim it is revenue neutral.”