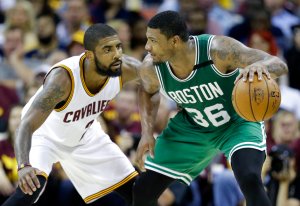 Boston Celtics’ Marcus Smart (36) looks to drive on Cleveland Cavaliers’ Kyrie Irving (2) during the second half of Game 3 of the NBA basketball Eastern Conference finals, Sunday, May 21, 2017, in Cleveland. (AP Photo/Tony Dejak)

Avery Bradley’s 3-pointer danced on the rim and dropped with less than a second left and Boston, blown out in the first two games of the Eastern Conference finals and playing without star Isaiah Thomas, stunned the Cleveland Cavaliers 111-108 on Sunday night in Game 3 to end the champions’ 13-game postseason winning streak.

Bradley’s shot from the left wing — off a play designed by coach Brad Stevens — bounced on the rim four times before going down. It capped a furious, focused comeback by the Celtics, who trailed by 21 in the third quarter before rallying to tighten up a series that appeared to be over.

“We have guys who have chips on their shoulders,” Boston coach Brad Stevens said. “We knew that Friday (Game 2) was a disaster. It wasn’t worth all four. It was worth one. So we got back together.”

Smart, who started in place of Thomas, made seven 3-pointers and scored 27 points, and Bradley had 20 for the Celtics, who were given little chance after losing by 44 in Game 2 and then losing Thomas for the rest of the postseason because of a hip injury.

“Everybody had to step up their game tonight especially with one of our brothers down,” Smart said. “Our love and support goes out to Isaiah. We wish he could be here but we understand. We just kept fighting. Everybody did their part.”

Kyrie Irving scored 29 points, and Kevin Love had 28 for Cleveland. The Cavaliers dropped to 10-1 in the postseason with their first loss since Game 4 of last year’s Finals.

Game 4 is Tuesday night in Cleveland.

LeBron James had one of the worst games of his postseason career, finishing with 11 points and six turnovers. On his way to the postgame news conference, the superstar got into an exchange with a fan who heckled him about his rough night.

“I didn’t have it,” said James. “You let a team like that grab momentum you almost knew a shot like that was going in.”

Despite James’ struggles, the Cavs led 77-56 in the third quarter after making 14 3-pointers in the first half. But Cleveland got complacent, Smart got hot and the Celtics, who arrived at Quicken Loans Arena on Sunday morning for their shootaround without Thomas and looking somewhat defeated, never gave up.

“We decided were going to go out and play hard, swinging.” Bradley said. “We never counted ourselves out.”

The Celtics tied the Cavs at 95-all on Smart’s 3-pointer and then matched the James and Co. basket for basket in the final minutes in one of the most entertaining games of what has been a mostly boring postseason.

Boston’s Jonas Jerebko’s baseline jumper put the Celtics ahead 108-106 with 30 seconds left before Irving scored on a drive to tie it with 10.7 seconds left.

Following a timeout, the Celtics perfectly executed a play drawn up by Stevens and worked the ball to Bradley, who found himself open and then calmly knocked down a shot that goes straight into Celtics lore.

For Cleveland, the loss was a wake-up call on their march toward a possible third straight Finals and a seemingly inevitable rematch with Golden State. The Cavs had been playing a glorified game of H.O.R.S.E. with the Warriors, who are undefeated and can complete a sweep of San Antonio on Monday night.

“I’m kind of glad it happened the way it did,” James said. “We have to play a lot better. “I feel some adversity is part of the postseason. If it’s going to happen, let it happen now. Let’s regroup and get back to playing desperate basketball, which they did tonight. We’ve got to be a lot better for sure.”

James helped Boston’s comeback by going 0 for 6 and scoring just one point in the final 18 minutes.

Jerebko took exception to being called for a foul when Love hit the floor after the two got tangled up in the fourth quarter.

“I thought he flopped,” Jerebko said. “I don’t like people flopping. I don’t flop. I had to tell him. He kind of laughed. He knew he flopped. He’s a great player, but stand up. Don’t flop. That’s my motto at least.”

Celtics: Stevens said Thomas will visit hip specialists over the next few days and may need surgery. … Stevens didn’t review much of the Game 2 tape, but there’s a mental image in his head of the Cavs making tough shot after tough shot. “As good as they are and they are tremendous, that might have been the best game I’ve ever seen a team play against us,” he said. Does that mean college too? “Yeah, I think they would have beaten all those teams, too,” he said, drawing laughter.

Cavaliers: James needs 62 points to pass Michael Jordan as the top scorer in postseason history. … Cavs coach Tyronn Lue was an assistant in Boston and said his team reminds him of those Celtics teams with Kevin Garnett, Paul Pierce and Rajon Rondo. “That was a tight group,” he said. “They did everything together, dinners and everything.” … Browns defensive end Myles Garrett, the No. 1 overall pick in the NFL draft, and fellow rookie Jabrill Peppers took a few shots on the floor before the teams came out for warmups.