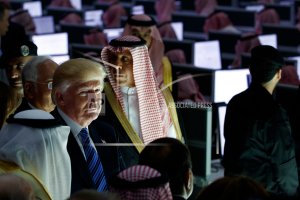 President Donald Trump listens during a ceremony to mark the opening of the Global Center for Combatting Extremist Ideology, Sunday, May 21, 2017, in Riyadh. (AP Photo/Evan Vucci)

RIYADH, Saudi Arabia (AP) — As President Donald Trump opened his keynote address in Saudi Arabia, he lavished praise on the “magnificent” kingdom and “the grandeur of this remarkable place.”

Then he made clear there would be no public lecture from America on Saudi Arabia’s abysmal human rights record.

“We are not here to tell other people how to live, what to do, who to be, or how to worship,” Trump declared Sunday.

Trump’s willingness to set aside human rights as a principal foreign policy has been one constant in his chaotic administration. Yet the absence of any public reference to the kingdom’s treatment of women and political opponents during his two-day visit was still jarring, particularly when contrasted with his affectionate embrace of the royal family.

The closest Trump came to acknowledging the human rights situation was a call for the region’s leaders to stand together against “the oppression of women.” A White House official later said the president did raise women’s rights in his private meetings with Saudi officials, and noted that administration officials broached the topic in their talks in the lead-up to the trip. The official insisted on anonymity in order to discuss the private meetings.

To be sure, Trump’s predecessors have also forged close ties with Saudi Arabia, an important U.S. partner in the Middle East, and other nations with questionable human rights records. But in their own ways, former Presidents Barack Obama and George W. Bush each vouched for American values in their dealings with those nations, including the kingdom.

During a 2014 trip to Riyadh, Obama met with a Saudi woman who spread awareness of domestic violence in her country and presented her with the State Department’s International Women of Courage award. His opening address to the Muslim world in 2009 also made numerous references to democracy and human rights.

Human rights were a regular part of the dialogue with the Saudis under the Bush administration. In 2004, the State Department listed the kingdom as “a country of particular concern” in its annual report on International Religious Freedom.

Saudi Arabia adheres to an ultraconservative interpretation of Islamic Shariah law where unrelated men and women are segregated in most public places. Women are banned from driving, although rights advocates have campaigned to lift that ban. Guardianship laws also require a male relative’s consent before a woman can obtain a passport, travel or marry. Often that relative is a father or husband, but in the absence of both can be the woman’s own son.

Saudi Arabia also routinely carries out executions by beheading, including some in public.

Ivanka Trump, the president’s daughter and senior adviser, was more direct during an entrepreneurship roundtable with Saudi women Sunday morning, telling the participants that in every country, “women and girls continue to face unique systematic, institutional, cultural barriers, which hinder us from fully engaging in and achieving true parity of opportunity within our communities.”

“Each of you know this to be true,” she said.

“It’s not that entrepreneurship isn’t important, but you need serious political changes so that that the laws that restrict women from functioning in the work place are reversed,” Beckerle said. “Without that, any amount of money or investment won’t go very far.”

Some lawmakers in both parties raised concerns with Trump’s reluctance to publicly vouch for U.S. values in places where people are persecuted.

“I think that would be a terrible abdication of our global leadership when it comes to advocating for people who are the subject of persecution, or imprisoned, or journalists that are thrown in jail, or people not allowed to practice their faith,” Rep. Adam Schiff, D-Calif., said on CNN. “I think it would be a historic mistake for us to walk away from that.”

Florida Sen. Marco Rubio, who challenged Trump for the Republican presidential nomination last year, said he would not have promised to avoid the topic of human rights with the Saudis.

“That would not have been a part of a speech that I would have delivered,” Rubio said in his own appearance on CNN. “I think it’s in our national security interest to advocate for democracy and freedom and human rights, now, with a recognition that you may not get it overnight.”

However, when reporters shouted out questions regarding Saudi Arabia’s human rights record — namely, one question about when the kingdom intends to allow women to drive — Tillerson ignored it.