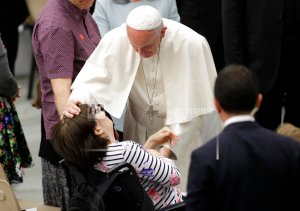 Pope Francis caresses a sick woman during an audience with Huntington’s disease sufferers and their families, in the Paul VI Hall, at the Vatican, Thursday, May 18, 2017. Francis is trying to end the stigma of people afflicted with Huntington’s Disease, an incurable genetic brain disorder that causes such serious involuntary movements and psychiatric problems that sufferers are often shunned and isolated. (AP Photo/Andrew Medichini)

VATICAN CITY (AP) — Pope Francis embraced weeping mothers, fathers and children with Huntington’s Disease on Thursday as he sought to remove the stigma of an incurable genetic disorder that causes such devastating physical and psychiatric effects that its sufferers are often shunned and abandoned.

One by one, Francis blessed and greeted each of the 150 people with Huntington’s, as well as their family members and caregivers, who traveled from around the world for the hour-long audience in the Vatican audience hall. Organizers said the meeting marked the first time a world leader had recognized the plight of those who suffer from Huntington’s.

Many of the families came from South America, where Huntington’s is 1,000 times more prevalent than in the rest of the world. It is particularly prevalent in Venezuela, where the affected gene was first identified 25 years ago and where the stigma has led to such isolation that carriers have intermarried for generations, leading to greater numbers of sick.

One Colombian woman in the front row, Dilia, has had four of her 11 children die of Huntington’s, while four others are sick with it. Brenda, a 15-year old from Francis’ native Buenos Aires, was up on the stage and got a special hug from the pope. The teen’s father died from Huntington’s-related ailments, and Brenda was abandoned by her mother when she herself was diagnosed.

The disease causes cells in parts of the brain to die, resulting over time in involuntary movements, personality and mood changes and slurred speech. Many people suffer from psychiatric problems, including depression and anxiety.

Often the social stigma and superstition associated with Huntington’s forces families to keep their relatives hidden — isolation that then can be compounded by poverty and discrimination. In some parts of Latin America, sufferers are thought to be possessed by the devil.

Organizers said the audience marked the start of a global awareness campaign, “Hidden No More,” which aims to also encourage scientific research into the disease, which has no treatment or cure.

The catalyst for the audience with the pope was Elena Cattaneo, an Italian researcher and senator for life, who in June of 2016 wrote to Francis asking that he meet with a single Huntington’s sufferer, to serve as a representative for the global Huntington’s community.

The response from the Vatican was to ask why only one, when so many people suffer, she said.

“This changed all our plans!” a choked-up Cattaneo told The Associated Press after the audience.

One benefactor bought plane tickets for 30 sick Poles since they couldn’t endure the lengthy bus ride. Another offered purses with 200 euros apiece in spending money for 50 of the poorest from Latin America.

Still another picked up the tab for a round of gelato on one of Rome’s prettiest squares. The visitors went to see the Italian Senate. A private tour of the Sistine Chapel is planned.

But Cattaneo said Francis’ words and gestures Thursday meant the most.

“His embrace immediately dissolved this cloak of obscurity, and this ignorance that this is a contagious disease,” she said through tears. “Those words changed their lives.”