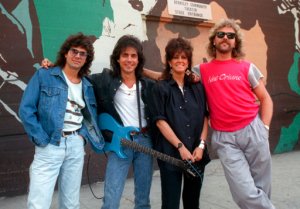 FILE – In this July 24, 1987 file photo, members of Starship, from left, Mickey Thomas, Craig Chaquico, Grace Slick and Donny Baldwin, pose outside the Berkeley Community Theater stage entrance after a rehearsal in Berkeley, Calif. Chaquico is asking a judge to prevent a new iteration of Jefferson Starship from using the name in a federal lawsuit filed Thursday, April 27, 2017, in San Francisco. The suit states the band’s members agreed to retire the Jefferson Starship name in 1985 after founding member Paul Kantner left the group. Some members later formed a group Starship, which recorded the hit “We Built This City.” (AP Photo/Doug Atkins, File)

SAN FRANCISCO (AP) — A founding member of Jefferson Starship filed a lawsuit Thursday to stop some of his former bandmates from using the band’s name for upcoming performances and merchandise.

Guitarist Craig Chaquico is asking a judge to prevent a new iteration of Jefferson Starship from using the name in the federal lawsuit filed in San Francisco. He claims the group has been using the Jefferson Starship name without permission, and has used his image to promote shows through early 2018.

The lawsuit said the band’s members agreed to retire the Jefferson Starship name in 1985 after founding member Paul Kantner left the group.

Chaquico allowed Kantner to use the Jefferson Starship name for several years, but that right ended when Kantner died in 2016, the lawsuit said.

Jim Lenz, to a representative for the new iteration of Jefferson Starship, did not immediately respond to an emailed message seeking comment.

The band has gone through numerous iterations, starting out as Jefferson Airplane, which featured Grace Slick singing huge hits such as “White Rabbit” and “Somebody to Love” and famed guitarist Jorma Kaukonen.

Chaquico, who was discovered by Kantner, performed with Jefferson Airplane a few times before it disbanded in 1972.

Several of the band’s members formed Jefferson Starship in 1974, but it broke up a decade later. Chaquico and other members then formed a new group, Starship, which recorded the hit “We Built This City.”

“This case is about tarnishing the legacy of the original Jefferson Starship band,” Chaquico said in a statement.

“We retired the name in 1985 and we agreed that nobody would use the name again. For this band line-up to tour and call itself Jefferson Starship is woefully misleading to the public and confuses longtime fans.”
Copyright 2017 The Associated Press. All rights reserved. This material may not be published, broadcast, rewritten or redistributed.