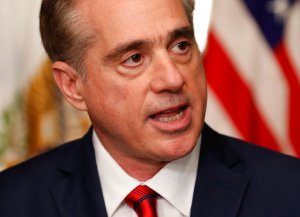 FILE – In this Feb. 14, 2017 file photo, Veterans Affairs Secretary David Shulkin speaks in the Eisenhower Executive Office Building on the White House complex in Washington. Despite the lifting of a federal hiring freeze, the Department of Veterans Affairs is opting to leave thousands of positions unfilled. It is citing the need for a leaner VA as it develops a longer-term plan to allow more veterans to seek medical care in the private sector. (AP Photo/Carolyn Kaster, File)

WASHINGTON (AP) — Despite the lifting of a federal hiring freeze, the Department of Veterans Affairs is leaving thousands of positions unfilled, citing the need for a leaner VA as it develops a longer-term plan to allow more veterans to seek medical care in the private sector.

The order by VA Secretary David Shulkin is described in an internal April 14 memorandum obtained by The Associated Press. The VA indicated it would proceed with filling open positions previously exempted under the hiring freeze. Noting that the White House had ordered all departments to be leaner and “more accountable,” the VA indicated that more than 4,000 jobs would still be left vacant unless they were specially approved “position by position” by top VA leadership as addressing an “absolute critical need.”

These positions include roughly 4,000 in the VA’s health arm and 200 in benefits, plus more than 400 information technology positions and over a 100 human resource positions, according to VA data provided to the Senate Veterans Affairs Committee earlier this month. Government auditors have previously faulted the department for recent shortages in IT and HR, which it said it had hurt its ability to recruit and hire key staff department-wide.

Major veterans organizations also worry this could be a sign of future tightening at the VA, coming after the department had previously warned it would need “hiring surges” to address a rapidly growing disability backlog. The groups have cautioned against any “privatization” efforts at the VA that could expand private care for veterans while reducing investment in the VA itself.

“It seems to a reversal of what they have been saying, and it’s disappointing,” said Garry Augustine, executive director of Disabled American Veterans’ Washington headquarters.

Carlos Fuentes, legislative director of Veterans of Foreign Wars, said his group was concerned the

VA would overlook positions that didn’t directly affect health care, such as staffing of its suicide prevention hotline.

While President Donald Trump’s budget blueprint calls for a 6 percent increase in VA funding, the memo indicated that the government’s second largest agency with nearly 370,000 employees was no different from other departments that needed to improve “efficiency, effectiveness and accountability” and left open the possibility of “near-term” and “long-term workforce reductions.” Shulkin is also putting together a broader proposal by fall to expand the VA’s Choice program of private-sector care.

“This memo lifts the federal hiring freeze. However, this does not mean business as usual for hiring,” stated VA chief of staff Vivieca Wright Simpson. She said VA leadership aimed to proceed in the coming months with “deliberative hiring strategies” as it seeks to build “a future VA of Choice.”

The memo comes as the Trump administration seeks to highlight accomplishment and accountability at the VA. During the 2016 campaign, Trump repeatedly criticized the VA as “the most corrupt” and pledged to expand private care.

Trump planned to sign an executive order Thursday to create a VA Office of Accountability and Whistleblower Protection, according to a White House official who spoke on condition of anonymity because the official was not authorized to discuss the matter on the record.

Shulkin has acknowledged that the VA was hurt initially by the hiring freeze because it could not hire claims processors. Shulkin later exempted those positions, including 242 the VA earmarked for this year to specifically address an appeals backlog, a 36 percent increase. But the VA has said it would need an additional hiring “surge” of at least 1,458 full-time staff to stem a growing appeals backlog. The backlog was expected to exceed 1 million within a decade, with average wait times of 8.5 years. The current wait time is as many as five years.

Shulkin also has signaled, without naming specific locations, that underutilized VA facilities will have to close. “There are some parts of the country where facilities are sitting empty, and there is no sense in keeping them empty,” he has said.

Meanwhile, the VA is stepping up efforts to root out bad employees.

The executive order being signed by Trump would create a VA office to “discipline or terminate VA managers or employees who fail to carry out their duties in helping our veterans.”

Recent audits by the VA inspector general and a report by The Associated Press in February found a pattern of poor VA compliance involving equipment and drug inventory checks, putting patients at risk at the Washington, D.C. medical center and leading to a sharp rise in opioid thefts across the VA system since 2009.

The Republican-led House last month approved legislation to make it easier for the VA to fire, suspend or demote employees for poor performance or bad conduct. But the measure has been slow to move in the Senate after Democrats and unions cast it as an attack on workers’ rights.