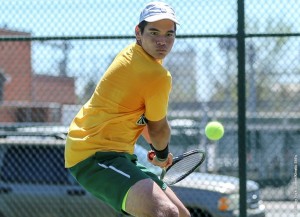 Despite the final score, the Spartans did not go away quietly. They split the first two doubles matches and had a chance to even the final match at 5-all before South Carolina State rallied to win the doubles point. The top four singles matches were competitive throughout. NSU’s top two players had set-point opportunities in their respective first-set tiebreakers before falling into early 1-0 holes.

Flavian Fernandez and Agustin Carrizo of Norfolk State trailed South Carolina State’s middle duo of Vladyslav Yanchenko and Stanislav Baco by a 5-2 score. The Spartan tandem cut the deficit to 5-4 and had an opportunity to even the match at 5-all. However, the Bulldogs rallied and took the match 6-4, earning the doubles point.

In singles action, South Carolina State claimed victories at the Nos. 1, 5 and 6 positions. Baco cruised to a 6-1, 6-3 victory over Carrizo at the No. 5 position, while Aleksander Stupar defeated Guevel 6-1, 6-1 at the No. 6.

At the conclusion of those matches, Norfolk State still had a chance to win, but needed to claim victories at the four remaining singles positions. Alcaraz, Fernandez and Da Silva each held early leads in their respective matches, but Fernandez was the only Spartan to hold on and win the first set.

Norfolk State will return its entire team for next season as all six players on this year’s squad were underclassmen.