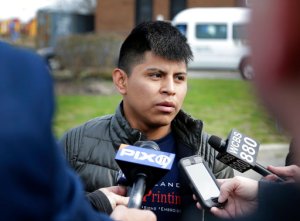 William Tigre talks to reporters at a crime scene where the bodies of four men were found in Central Islip, N.Y., Thursday, April 13, 2017. Tigre said an acquaintance told him Wednesday night that his 18-year-old brother, Jorge, was one of the victims. Police say they’re investigating the disappearance of Jorge Tigre, but would not comment on whether the teenager was among those killed. (AP Photo/Seth Wenig)

CENTRAL ISLIP, N.Y. (AP) — Four young men found dead in a park from injuries inflicted by a sharp-edged object were killed in a way that is consistent with the methods of the MS-13 street gang, according to police, who declared war against gang violence in the suburbs of Long Island.

The victims, ranging in age from 16 to 20, were discovered in a wooded area near a soccer field in Central Islip, Suffolk County Police Commissioner Timothy Sini said. He said the bodies had “significant trauma” wounds, and he believes all the victims were killed there.

He did not definitively say the killings were the work of the MS-13 gang but said the tactics — using sharp instruments and extreme violence — were consistent with the gang, which has been gaining a foothold on Long Island for years.

“This is a long-term war and make no mistake about it it’s a war,” Sini told reporters, announcing a $25,000 reward for information about the killings. “Today is a sad day in Suffolk County, particularly for the loved ones and the family members and the friends of those who were murdered, but we maintain our resolve.”

William Tigre told reporters near the scene that an acquaintance told him Wednesday, April 12, night that his 18-year-old brother, Jorge, was among those killed. The acquaintance also indicated he knew of the killings because he had been there.

The acquaintance “called saying that my brother was here, dead,” Tigre, 21, said. “He just said, ‘I saw your brother dying, and I escaped.’ That’s the only thing he said. He didn’t say nothing else.”

Sini confirmed to The Associated Press that police had begun a missing-person’s investigation for Jorge Tigre on Tuesday. He would not comment on whether the teenager was among those killed.

The discovery of the bodies comes about a month after the arrest of eight MS-13 gang members in connection with the September killings of two teenage girls in nearby Brentwood.

Gang violence has been a problem in Central Islip, Brentwood and other Long Island communities for more than a decade, but Suffolk County police and the FBI began pouring resources into a crackdown after the killings of the girls, along with two other Brentwood High School students.

Prosecutors said Kayla Cuevas, 16, was targeted last summer by a group of four gang members because she had been feuding with MS-13 members at school and on social media. The group, which had been driving around looking for gang enemies, attacked when they came across her walking with Nisa Mickens, 15, in the street. The inseparable best friends were attacked with a machete and baseball bats, officials said.

Nisa “was simply at the wrong place at the wrong time, hanging out with her childhood friend,” former U.S. Attorney Robert Capers said in announcing the arrests. The site where the bodies were found Wednesday is near the federal courthouse where the killing suspects are being prosecuted.

Anthony Rubenstein, a 29-year-old electrician who graduated from Brentwood High School and lives near where the bodies were found, shook his head in frustration about the killings.

“It’s definitely something that’s becoming, unfortunately, normal,” he said. “We had violence back then when I was in high school but never like this. I don’t know what it is, but it’s definitely getting worse.”

The MS-13 gang, also called Mara Salvatrucha, is believed to have been founded as a neighborhood street gang in Los Angeles in the mid-1980s by immigrants fleeing a civil war in El Salvador. It grew after some members were deported to El Salvador, helping turn that country into one of the most violent places in the world. It’s now a major international criminal enterprise with tens of thousands of members in several Central American countries and many U.S. states.

In December, President Donald Trump referenced the slayings in Brentwood during a profile for his Time magazine Person of the Year award.

One of his priorities is cracking down on immigrants who are in the country illegally and have committed crimes. He promised as much in a Time interview, referencing a Newsday story about the killings.

“They come from Central America. They’re tougher than any people you’ve ever met,” he said. “They’re killing and raping everybody out there. They’re illegal. And they are finished.”