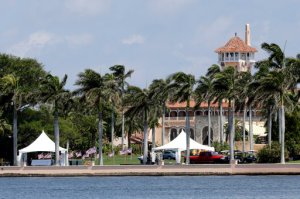 FILE – In this April 3, 2017 file photo, President Donald Trump’s Mar-a-Lago resort in Palm Beach, Fla. It’s widely estimated that each trip to the resort costs taxpayers $3 million, based on a government study of the cost of a 2013 trip to Florida by President Barack Obama. But that trip was more complicated and the study’s author says it can’t be used to calculate the cost of Trump’s travel. This weekend, Trump is making his seventh visit to Mar-a-Lago since becoming president. (AP Photo/Lynne Sladky, File)

Among the “high priority” problems described as “potentially hazardous” were faulty fridges with meats stored well above the required 41 degrees Fahrenheit. For example, in the restaurant’s walk-in cooler the duck and beef were measured at 50 degrees, while a ham was at 57.

Other issues included smoked salmon being served without undergoing “proper parasite destruction.” A handwashing sink for employees ran water that was not hot enough.

Stephen Lawson, spokesman for the Florida Department of Business and Professional Regulation, said the violations were the result of a routine inspection and were not prompted by any consumer complaints or food-borne illnesses.

“The infractions were corrected on site, and the establishment was immediately brought into compliance,” Lawson said on Thursday.

The January inspections were not the first time inspectors have found problems at Mar-a-Lago. Over the last three years, records show the club has been cited 78 times for violations that included chefs handling food without washing their hands, dirty cutting boards, a slicer “soiled with old food debris” and an “accumulation of “black/green mold-like substance” in the ice machine.

Lawson said inspectors will return to Mar-a-Lago for another unannounced visit before the end of the year.

The Trump Organization, which operates the family’s business empire, did not immediately respond to an email requesting comment. The violations were first made public weeks ago, but received broader attention this week following a report in the Miami Herald.

Trump is a frequent visitor to his private club in Palm Beach. The president often refers to the property as the Winter White House. He hosted a summit with Chinese leader Xi Jinping there last weekend, where Trump said the men shared a “beautiful” chocolate cake while discussing the U.S. cruise missile strike on Syria.