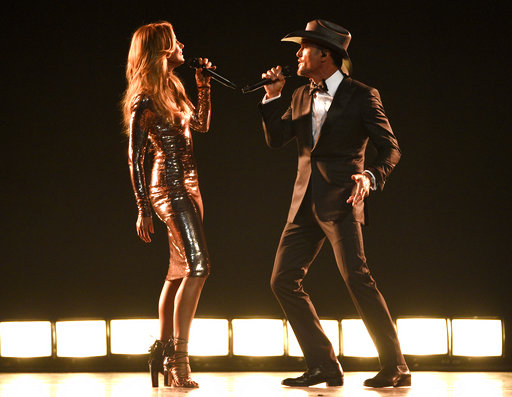 FILE – In this April 2, 2017 photo, Faith Hill, left, and Tim McGraw perform “Speak To A Girl” at the 52nd annual Academy of Country Music Awards in Las Vegas. The country couple with movie star glamour has sold over 63 million albums in the U.S. between their two careers, has earned two Grammys for duets they sang together and has three children. This year, they are releasing their first-ever duet album together and started their third installment of their highly successful Soul2Soul World tour on April 7. (Photo by Chris Pizzello/Invision/AP, File)

LAS VEGAS (AP) — The love story of Tim McGraw and Faith Hill started on a tour two decades ago and that sparkling chemistry onstage has made them one of the genre’s biggest headliners.

The country couple with movie star glamour has sold over 63 million albums in the U.S. between their two careers, has earned two Grammys for duets they sang together and has three children. This year, they are releasing their first-ever duet album together and started their third installment of their highly successful Soul2Soul World (it launched last week).

“I haven’t been on a stage like this in 10 years and that is no lie,” Hill said of the tour. “I can tell you right now I am fired up.”

During an Associated Press interview with the couple before their rehearsal at the Academy of Country Music Awards in Las Vegas earlier this month, Hill and McGraw were giddy with anticipation.

“Age is not an issue,” added Hill, who together with her husband will be turning 50 during the tour that runs through October.

The Mississippi-born Hill and the Louisiana-born McGraw fell in love when she opened for him on his 1996 Spontaneous Combustion tour and they married that year.

McGraw credited their success on the road to the fact that they are very different singers who push each other to expand their ranges onstage.

“Faith, I would say, is more of an R&B, sort of gospel-inspired singer,” McGraw said. “And I think I am more a ’70s rock, arena rock, Merle Haggard meets arena rock kind of singer. She brings me a little bit more to the R&B side, and I bring her more to the arena rock side, and I think it creates a sort of magic.”

Their first duet together, “It’s Your Love,” was on McGraw’s 1997 “Everywhere” album, which was followed by “Just to Hear You Say That You Love Me,” from Hill’s multiplatinum album “Faith.” Since then, they have had several popular duets, including their latest, “Speak to A Girl,” which jumped into the Top 10 of Billboard’s Hot country songs chart after they performed it on the ACM Awards.

But they say they don’t always agree in music, or in marriage, but McGraw said commitment is key.

“But you don’t walk away,” McGraw said.

“I would rather live a life in rocky road ice cream than vanilla any day of the week,” Hill said. “Honestly, vanilla gets boring after a couple of days.”

A smiling McGraw adds: “So I am not vanilla!”