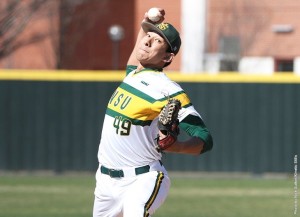 DOVER, Del. – A day after incurring its worst loss of the season, the Norfolk State baseball team rode the pitching of a pair of seniors to sweep a doubleheader from Delaware State and win a key MEAC series Sunday at Soldier Field.

Devin Hemmerich (6-2) won his fifth straight start in game one, striking out nine batters in a 3-2 NSU (14-14, 9-3 MEAC North) win. In game two, Jonathan Mauricio (2-2) pitched six innings of one-run ball and the Spartan bats awoke late in a 6-4 win that gave the Spartans a four-game edge over all of their competitors in the division.

Hemmerich scattered eight hits and two runs, one earned, over eight innings in Sunday’s opener. He ran his MEAC-leading strikeout total to 70 and is now just three punchouts away from breaking associate head coach Joey Seal‘s school career record of 269.

The Spartans never trailed after scoring single runs in each of the first three innings. In the top of the first, outfielder Tony Leite led off the game with a single. He would later score on a two-out DSU error.

In the second, freshman designated hitter Stephen Baughan hit his first collegiate homer, a solo shot to left field that led off the frame against Hornet starter Garrett Lawson (2-4). The Spartans extended their lead to 3-0 in the third as outfielder Andre’ Moore led off with a double and scored on Roger Hall‘s sacrifice fly.

The Hornets (9-17, 5-7) cut into their deficit with Kwestin Smith’s RBI groundout in the fifth and Austin Bentley’s run-scoring single in the sixth. But Hemmerich pitched out of a bases-loaded, one-out jam in the eighth, wrapping up his day with his ninth and final strikeout to end the inning.

Brian Beard moved from second base to the mound in the ninth inning, pitching a 1-2-3 frame with two strikeouts for his second save.

Baughan and Moore were both 2-for-4 for the Spartans in the opener.

In the nightcap, DSU took a 1-0 lead in the fourth inning of the seven-inning affair on Jaylen Zielecki’s RBI single. The score remained that way until the sixth, when the Spartans pieced together a two-out rally with no one on base. Beard started the uprising with a single and took second on an error before scoring the tying run on Alex Mauricio‘s RBI single.

Hall and Baughan pushed NSU into the lead with RBI singles of their own, and Justin Burrell capped the rally with an RBI double. Leite padded the NSU edge to 6-1 with a two-run homer, his first of the season, in the seventh inning.

The Spartans needed the insurance as DSU scored three times in the bottom of the seventh and final frame. Ciaran Devenney hit a two-out, two-run double off Beard and Jared Gillis brought the Hornets within 6-4 with a run-scoring single.

But Beard got Zielecki to pop out to end the game.

Eight different Spartans had one hit apiece, with Beard (2-for-3) the only Spartan notching more than one in the second game. Five Spartans had at least one RBI. Gillis was 3-for-4 to lead the Hornets.

At the halfway mark of conference play, the Spartans are the only MEAC Northern Division team with a winning record. DSU, Coppin State and Maryland Eastern Shore are all 5-7 in the division with 12 games to play. NSU plays nine of its final 12 MEAC games are home.

After playing 11 straight road games, the Spartans return home to host William & May at 5 p.m. Wednesday before welcoming Maryland Eastern Shore for a three-game MEAC series next Friday and Saturday.