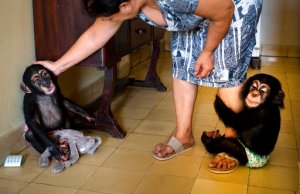 In this April 4, 2017 photo, Zoologist Marta Llanes caresses baby chimpanzee Anuma II, left, while Ada hangs on to her leg, at Llanes’ apartment, in Havana, Cuba. She has forgiven them every transgression. It’s hard to stay angry at a baby chimpanzee when it clambers up your leg and into your arms and plants a kiss on your cheek in a plea for forgiveness. (AP Photo/Ramon Espinosa)

HAVANA (AP) — Over the last year Ada and Anuma II have broken Marta Llanes’ television and computer key board, chewed her telephone to pieces and ruined much of her furniture.

She has forgiven them every transgression. It’s hard to stay angry at a baby chimpanzee when it clambers up your leg and into your arms and plants a kiss on your cheek in a plea for forgiveness.

While zoos in other countries may have specialized facilities for raising baby animals, in Cuba the job falls to Llanes, a 62-year-old zoologist who has cared for 10 baby chimps in her central Havana apartment since she started working at the city zoo in 1983. It’s hard work that requires watching the apes nearly 17 hours a day until they are returned to the zoo after their first birthday.

She leaves her home a few hours each week when another zoologist delivers milk, fruit and cleaning products, and cares for the animals while Llanes takes a break.

Meanwhile, Llanes’ apartment looks like any that’s home to two infants, albeit infants able to scramble up chairs, tables and virtually any other object with already-strong arms and legs, and feet with opposable “thumbs.” The floor is covered with toys, all sharp objects have been hidden away and the electric sockets covered to prevent a dangerous accidental shock.

Ada, the female, is 13 months old, and the male Anuma II is 15 months. Both wear diapers.

The chimpanzee, an endangered species, separated from humans on the evolutionary tree about 7 million years ago and shares some 90 percent of our DNA. Chimps are known for their intelligence and use of basic tools. They live half a century in the wild and even longer in captivity.

Llanes, who has an adult daughter, says it can be difficult to get female chimps to care for their offspring in captivity, and she’s been happy to step in. She is raising the baby chimps because their mothers at the zoo are too young and did not learn how to feed or care for them properly.

“I have to be at home with them 24 hours a day,” said Llanes, who rises at 5 a.m. and often watches the chimps until 10 p.m., with an occasional break during a simultaneous nap.

Llanes lives in a fifth-floor apartment in a building with dozens of residents, virtually all of whom say the baby chimps are good neighbors.

“They don’t bother anyone,” said Cari Dib, a 65-year-old housewife. “Plus, they’re adorable.”