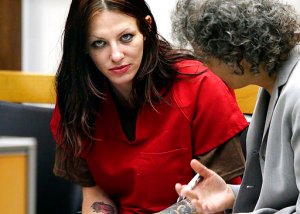 FILE – In this July 9, 2014 file photo, Alix Tichelman, left, of Folsom, Calif., confers with public defender Diane August during her arraignment in Santa Cruz Superior Court in Santa Cruz, Calif. Federal immigration officials are deporting a California prostitute to Canada after she completed a jail sentence for involuntary manslaughter for giving a fatal heroin shot to a Google executive she was entertaining aboard his yacht. An Immigration and Customs Enforcement spokesman says Friday, April 7, 2017, that a judge ordered Alix Tichelman deported because of the felony convictions connected to the accidental overdose death of Forrest Hayes in November 2013. (AP Photo/Santa Cruz Sentinel, Shmuel Thaler, File)

SAN FRANCISCO (AP) — Federal immigration officials said Friday, Apr. 7 they were deporting a California prostitute to Canada after she completed a jail sentence for involuntary manslaughter for giving a fatal heroin shot to a Google executive she had been entertaining aboard his yacht.

Immigration and Customs Enforcement spokesman James Schwab said a judge ordered Alix Tichelman, 29, deported to Canada because of her felony convictions connected to the accidental overdose death of Forrest Hayes in November 2013. She also pleaded guilty to a felony charge of administering drugs.

Immigration agents arrested her after she finished her jail sentence on March 29.

Schwab declined to disclose Tichelman’s immigration status in the United States or whether she was represented by an immigration attorney.

The San Jose Mercury News reported Wednesday (https://tinyurl.com/kh57ayj) that Tichelman holds a permit to permanently work and live in the United States. The paper reported that Tichelman was raised in Georgia and spent little time in Canada.

Police said a surveillance video at the harbor showed Tichelman at first panicking and trying to revive Hayes. Then it showed her casually step over Hayes’ body, finish a glass of wine and lower a blind before leaving the yacht.

Hayes had hired Tichelman several times previously. They were doing drugs and having sex the night he died, authorities said.

After Tichelman was charged in California, police in Milton, Georgia, took another look at the 2013 overdose death of Tichelman’s former boyfriend Dean Riopelle, 53. He was the owner of a popular Atlanta music venue.

Authorities said a panicked Tichelman had called Milton police, saying Riopelle had overdosed on drugs and wasn’t responding. Tichelman was not charged.

An autopsy report listed Riopelle’s death as an accidental overdose of heroin, oxycodone and alcohol.