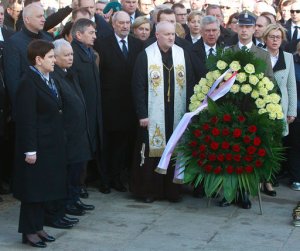 Polish Prime Minister Beata Szydlo, left, and Jaroslaw Kaczynski, second left, the head of the ruling Law and Justice party, attend a ceremony in memory of the late President Lech Kaczynski on the seventh anniversary of a plane crash that that killed Kaczynski, the first lady and 94 others in Russia, in Warsaw, Poland, Monday, April 10, 2017. (AP Photo/Czarek Sokolowski)

WARSAW, Poland (AP) — Poland observed the seventh anniversary Monday, Apr. 10 of a plane crash in Russia that killed President Lech Kaczynski, his wife and 94 others, marking the day with wreath-laying ceremonies and prayers — and renewed suggestions from those in power that foul play was involved.

Poland’s ruling party, Law and Justice, is headed by Kaczynski’s twin brother, Jaroslaw Kaczynski, who has led regular commemorations of the tragedy and who thinks many questions surrounding the crash remain unanswered.

Kaczynski has questioned conclusions by Polish and Russian aviation experts who said the crash was an accident resulting from errors by the crew trying to land at the rudimentary airport in Smolensk in dense fog.

According to official investigations, the plane crashed after one wing broke when it clipped a tree while trying to land in poor visibility.

But doubters have put forth other theories, including that Russia might have placed a bomb on board the plane to assassinate a president that had been critical of the Kremlin.

Kaczynski and his supporters, most notably Defense Minister Antoni Macierewicz, have also heaped blame on Donald Tusk, the then-Polish prime minister who is now one of the European Union’s top officials.

Both Russia and Tusk have denounced the accusations as absurd.

A commission appointed by the government to re-investigate the crash presented preliminary findings Monday, suggesting there could have been an explosion on board before the plane crashed and repeating allegations that Russian air traffic controllers played a role in the disaster.

In its presentation, the committee illustrated the experiments and simulations it used in recent months, all of which undermine the official findings.

Among its findings, the committee said the plane started to disintegrate before it hit the tree and that the loss of a wing’s tip could not have led to a crash. In addition, it said the spread of the debris and the burns on some of the bodies pointed “most probably” to an explosion from a bomb.

Kaczynski, addressing a large crowd of supporters in the evening, said he found the presentation “highly credible” and that the truth of Smolensk was approaching.

He also denounced the “hatred” of Poles who endorse the official version of the crash and don’t support his theories.

Maciej Lasek, who led the previous inquiry that concluded the crash was an accident, said there were no traces of explosives in the wreckage. He also noted that the voice recorder did not register an explosion.

Lasek, who was fired from his job as chief expert of air crashes last year by the current government, dismissed the present investigating team as a “group of amateurs” who were introducing “chaos, misunderstanding” or even “conscious manipulation.”

While the ruling party’s use of state bodies to pursue its crash theories appeals to backers who are suspicious of Russia, many are deeply critical.

Hundreds of people staged a noisy protest on the sidelines of Kaczynski’s evening speech, chanting “Liar” and “You’re going to jail.”

Lech Kaczynski and a delegation of Poland’s political and military elite had been flying to Russia to pay tribute to some 22,000 Polish officers, prisoners of war, killed in the forest of Katyn and at other locations by the Soviet secret police during World War II.

Vanessa Gera in Warsaw contributed to this report.