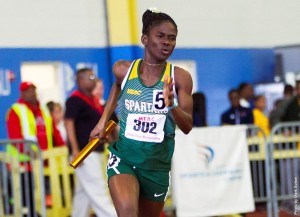 WILLIAMSBURG, Va. – Sophomore Tyrika Lee‘s PR in the 100 meters and freshman Martha Bissah‘s MEAC-leading 800-meter time were among the highlights in a runner-up team finish for the Norfolk State women’s track and field team at the Colonial Relays hosted by William & Mary.

Lee won the 100-meter dash in a time of 11.87 seconds, more than a tenth better than her previous personal-best set last year at Morgan State (11.98). Lee also clocked a season-best time in the 200-meter dash, placing second in 24.68 seconds for the Spartans, who tallied 64 team points to finish just behind meet winner Bucknell (65).

Lee also played a key role in a pair of runner-up finishes and a sixth-place showing for the Spartans in the relays. Lee, Janay Fields, Taejah Robertson and T’Nai Wells took second in both the 4×100 relay (46.97 seconds) and the 4×200 relay (1 minute, 39.25 seconds). Lee, Fields, Bissah and Candice Higgins won their heat and took sixth overall in the sprint medley relay (4:04.98).

Bissah, the MEAC indoor champ in the 800m, ran her first race at that distance this outdoor season at W&M. She won her heat in 2 minutes, 8.45 seconds. Bissah was third overall in the field behind American’s Brianna Belo and a post-collegiate athlete. Bissah’s time is the best in the MEAC this season and ranks as the 13th-fastest in the NCAA’s East Region after the weekend.

Juniors Brianna Hayes and Tasia Baxter turned in the best finishes for the Spartans in the field events. Hayes cleared 5-3 for 15th place in the high jump, and Baxter matched her season-best with a height of 10-6 in the pole vault.

The Spartans are off next weekend before returning to action at the Charlotte 49er Invitational in two weeks.