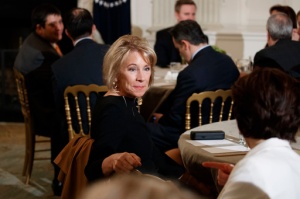 Education Secretary Betsy DeVos waits for the arrival of President Donald Trump to a meeting of the National Governors Association at the White House in Washington, Monday, Feb. 27, 2017. (AP Photo/Evan Vucci)

EDITOR’S NOTE _ A look at the veracity of claims by political figures.
WASHINGTON (AP) — Education Secretary Betsy DeVos is praising the country’s historically black colleges and universities as pioneers on school choice. She said in a speech Monday that African-Americans “took it upon themselves to provide the solution” when they were blocked from attending predominantly white institutions of higher education.

But DeVos’ comparison is off base. The goal of those schools was not to expand choices, but to provide black students with their only choice when confronted with segregation. A look at the facts:

DEVOS: “They saw that the system wasn’t working, that there was an absence of opportunity, so they took it upon themselves to provide the solution,” she said in a statement after meeting with HBCU presidents and chancellors who were in Washington to lobby administration officials. “HBCUs are real pioneers when it comes to school choice. They are living proof that when more options are provided to students, they are afforded greater access and greater quality. Their success has shown that more options help students flourish.”

THE FACTS: Historically black colleges and universities were created in direct response to racism in education — some soon after the Civil War ended in 1865 — as African-Americans were shut out from predominantly white schools. Though a handful of black students were enrolled at some private white colleges during segregation, for generations HBCUs were the only option open to black students seeking higher education. From their beginnings, the schools have accepted students of all races and cultures.

Racial tensions exploded in 1960s as black students attempted to integrate public colleges in several Southern states, in some cases requiring the National Guard to escort black students into campus buildings and to calm angry mobs.

DeVos visited Howard University, a historically black college, in Washington on her first day as Education secretary. At the meeting on Monday, she pledged to “elevate the role of HBCUs in this administration.” On Tuesday, in an address to HBCU leaders at a congressional luncheon, DeVos was more measured.

Though she referred to HBCUs as “an alternative option” and “bucking the status quo,” DeVos told the group: “Your history was born, not out of mere choice, but out of necessity, in the face of racism and in the aftermath of the Civil War.”