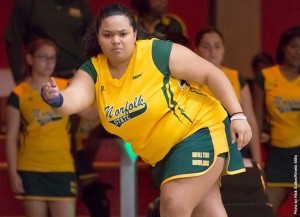 ORMOND BEACH, Fla. – The No. 21 Norfolk State bowling team tied North Carolina A&T with a 5-1 record over the weekend at the final MEAC Southern Divisional of the season hosted by Bethune-Cookman at the Ormond Lanes.

Because the Aggies came into the weekend one game up on NSU, North Carolina A&T won the regular season divisional title at 14-4. The Spartans finished second at 13-5.

The Spartans won all three matches on Saturday in traditional play, including a triumph over the No. 18 Aggies to momentarily force a tie for the division lead. North Carolina A&T got a measure of revenge on Sunday, knocking off the Spartans by the narrowest of margins to claim the title for good.

Freshman Heizel Quinones led the way on Saturday, posting a 200.3 average in all three games. Junior Briana Gardner, meanwhile, rolled a 212 in the win over the Aggies and averaged 188.0.

Rodriguez posted a 183.7 average in all three games, and freshman Aubrey Conrad tallied a 177.3 average. Freshman Jasmin Whitaker rounded out the starting five lineup for NSU on Saturday.

On Sunday in Baker play, Norfolk State knocked off Bethune-Cookman by a score of 941-790 to open up the day. Despite a 224 in the third of five games, NSU fell to the Aggies by eight pins, 881-873, in the second match of the day. The Spartans rounded out the divisional by topping Florida A&M, 865-832.

NSU (58-40 overall) will next compete at the USBC Intercollegiate Team Sectionals in Allentown, Pa., this upcoming weekend.