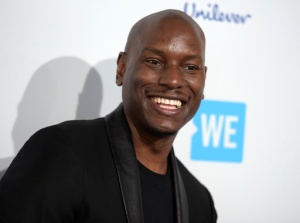 FILE – In this April 7, 2016, file photo, Tyrese Gibson arrives at WE Day California at the Forum in Inglewood, Calif. Gibson revealed on Feb. 28, 2017, that he was married on Valentine’s Day. (Photo by Richard Shotwell/Invision/AP, File)

Tyrese Gibson is off the market once again.

The actor and model shared a video on Instagram that included a series of photos from a Valentine’s Day wedding. He says he tried to keep the wedding a secret, but is opening up after the news got out.

Gibson doesn’t mention the name of his new bride in the video, but did offer a bit of a description. He says his wife has grace and elegance and is “college educated with multiple degrees.” He says she will serve as an example to his 9-year-old daughter Shayla. Gibson was married to Shayla’s mother, Norma Mitchell, from 2007 to 2009.

Gibson says celebrity Pastor Creflo Dollar offered advice in a pre-marital session, telling the couple to “focus on the gift of the present.”