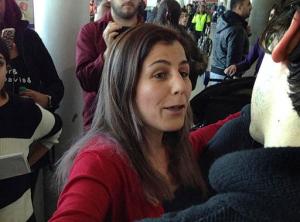 FILE- In this Jan. 29, 2017 file photo, Vahideh Rasekhi, an Iranian doctoral student at Stony Brook University, greets friends and family as she is released from detention at John F. Kennedy International Airport in New York, Sunday, Jan. 29, 2017. On Thursday, Feb. 23, 2017, the government has given civil rights attorneys a list of over 700 people subject to President Donald Trump’s travel ban who were detained or processed by U.S. border agents in the turbulent 27 hours after a judge partially blocked enforcement of the executive order. Lawyers agreed not to release the names publicly. (AP Photo/Seth Wenig, File)

NEW YORK (AP) — The government has given civil rights attorneys a list of 746 people subject to President Donald Trump’s travel ban who were detained or processed by U.S. border agents in the turbulent 27 hours after a judge partially blocked enforcement of the executive order.

U.S. District Judge Carol Bagley Amon in Brooklyn had ordered the list turned over by late Thursday, saying it must include the names of approved refugees, valid visa holders and other legal travelers. She is scheduled to preside over a Friday hearing.

The list includes travelers arriving in the U.S. on the late January weekend that Trump banned refugees and travelers from seven predominantly Muslim countries. A day later, a Brooklyn judge blocked the government from rejecting legal travelers.

The government said the list is composed of anyone subjected to Trump’s executive order who was detained or processed by agents in the 27 hours after the judge ruled.

It wasn’t clear how many of the 746 ultimately were admitted to the United States. Last week, the government said in a court filing that 44 people arriving at U.S. airports from the seven countries were deemed inadmissible on Jan. 27 and 28, while another 97 people were denied entry at land border ports or preclearance locations abroad. It said 24 of those who arrived at airports and 14 of the others have since been admitted into the United States.

“What’s interesting is how big the number is,” he said. “We’re pleased we have the list but would like to find out precisely how many people fall into each category so we can prioritize contacting people who may be overseas and in danger.”

He added: “The list of names is an important first step but we will need more information from the government. Among other things, we want to determine whether anybody who should have been on the list was left off the list. Right now, we have reason to believe that might be the case and we’re investigating.”
Copyright 2017 The Associated Press. All rights reserved. This material may not be published, broadcast, rewritten or redistributed.