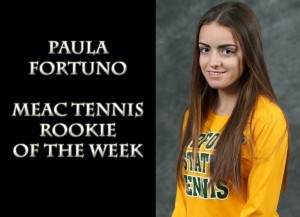 The Spartan’s opened the season with a 3-2 victory over Delaware State on Sunday. At No. 4 singles, Fortuno earned the match-clinching point with a 6-1, 7-5 victory over Leza Bessonova.

Norfolk State will have 14 days off before heading to Florida. The Spartans will play six matches in seven days, beginning with a match against Hampton on March 6 in Orlando.