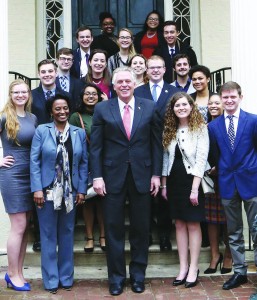 He said that he’s had great success in bringing in new businesses into Virginia with there now being over 185,000 new jobs with $14.32 billion in new capital, five billion more than any other governor who served before him, but there are too many high-paid jobs still open in the state.

In 2016, Virginia had 149,000 tech jobs open for an average of 49 to 50 days. Currently, there are now 36,000 cyber jobs open with a starting pay of $88,000. With jobs open and unoccupied, Gov. McAuliffe fears that not enough people are taking job opportunities and that the opportunities will soon dwindle down.

“That’s about 3.5 billion dollars of annual payroll wages worth about 25 million to the state. But much broader than that, these companies will leave our state and go elsewhere,” said McAuliffe.

He believes that college students need to learn a skill to match the jobs that exist today. He stated that he has meet with several college presidents to discuss the issue of college students not having the skills needed for the workforce and how they have a lack of knowledge of the job opportunities that are open within Virginia.

“We have student loan debt in Virginia, today, that is 30 billion dollars. People are having a hard time finding a job? Are you kidding me? I’ve got nearly 150,000 technological jobs open,” said Gov. McAuliffe when discussing student loans.

The governor also stated that he has had several problems with the General Assembly sending him anti-LGBTQ and anti-women legislation.

“I have made the point clear that you cannot grow an economy if you put walls up around it. You will not recruit Apple, Facebook, Google or any of those companies if these bills, which actually pass, come to my desk,” said McAuliffe.

He wants all student to be involved with the democracy and stated that he was disappointed to learn that 90 million Americans did not vote in the last election. In addition, he is not in support of President Trump’s new immigration policy and has stated that it is unconstitutional, citing the 1st and 5th amendment and the established equal protection clause.

“No one had any notice. Nobody knew what to do. The customs border agency didn’t have a clue. No U.S. embassies were told ahead of time,” said Gov. McAuliffe.

When discussing pay raises for teachers in Virginia, Secretary of Education Trent pointed out that Gov. McAuliffe put in a bill for a 1.5 percent bonus this year for teachers and state employees, but the General Assembly took it out. The pay raises will continue, but they will exclude teachers.

“What does that say to our teachers?” said Secretary Trent.

When discussing tuition, Trent pointed out that HBCUs are hurting the most.

The Commonwealth of Virginia has cut higher education for years and has been using the higher tuition of out-of-state students as a way to keep balance and allow for state universities to continue giving in-state students lower tuition. A problem that Gov. McAuliffe’s administration has pointed out is this mechanism is used by the General Assembly to fix a problem that they helped create instead of looking at the real problem of lower tuition rates.

Gov. McAuliffe stated that he is not in support of Virginia’s voting restrictions for felons. He signed papers twice to restore the voting rights of ex-felons, but was sued by members of the Republican Party for contempt of court after his second time signing. The case was dismissed and Gov. McAuliffe, under state constitution, is allowed to restore the right to vote, serve on a jury and run for public office. He has recently put in a bill to raise the felony larceny threshold to $500.

“If you go steal an iPhone or a pair of sneakers, you’re a felon. Now, how does that make sense? It should be a misdemeanor,” said McAuliffe.

He concluded the luncheon by stating that he believes students should do what they love doing.

“Do what you enjoy doing. We’ve got to have fun in life. I always tell people ‘Think big and take chances. Don’t be afraid to fail.’ I mean, at the end of the day, follow your passion,” McAuliffe said in closing.