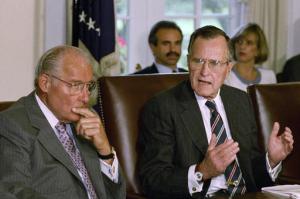 WASHINGTON (AP) — Bob Michel, an affable Illinois congressman who served as leader of the Republican House minority for 14 years and was skilled at seeking compromise critical in getting many initiatives of two Republican presidents through Congress, died Friday. He was 93.

A former staffer of Michel’s, Mike Johnson, said he passed away Friday morning.

Michel’s skill at seeking compromise with the Democrats was critical in helping Ronald Reagan and George H.W. Bush pursue their agendas during their presidential terms.

Michel served 19 terms in the GOP minority and retired one election too soon to be part of the GOP House majority that swept into power in 1994. He stood on the sidelines as an ebullient Newt Gingrich of Georgia took the role of House speaker. Gingrich praised Michel that day, but had considered him too pliable and conciliatory with the Democrats while he was Republican leader. But year after year, Michel had been faced with cutting deals with the Democratic majority. He admitted at a GOP fundraiser in 1994 that it was bittersweet to leave office just before Republicans took control of the House.

“There are times when I feel like a small boy who has dutifully eaten his spinach and broccoli but who leaves the dinner table before mom brings in the strawberry shortcake,” Michel told a crowd of Republicans. In one of the more ironic developments at the Capitol, the offices of the House speaker were dedicated to Michel and called the Robert H. Michel Rooms.

The current House speaker who occupies those offices, Paul Ryan, R-Wis., said in a statement, “What a life well-lived by this great and gracious man. Today the members of the House_past and present_mourn with the family and friends of our former colleague and leader.”

Michel had announced in late 1993 that he would not seek another term, citing lost power under a Democratic administration and a new class of lawmakers making their careers by “trashing the institution.” In an interview after the 1994 election, Michel criticized the GOP’s “Contract With America,” saying its tax-cutting and defense spending provisions could actually worsen the budget deficit.

Throughout his service, Michel was seen as a gentleman who considered many Democrats and Republicans among his friends.

“He had many opponents, but no enemies,” former President Richard Nixon said in taped remarks to a crowd of Republicans paying tribute near the end of Michel’s time in Congress. And that was a big factor in his leadership style. “Ideological activists believe they know the truth and they don’t want to negotiate or compromise or even talk about compromise,” he once said. “But in the House the ability to strike a wise compromise is an essential part of leadership.”

el indicated that always being in the minority was taking its toll. “Those who have been kings of the hill for so long may forget that majority status is not a divine right,” he said of the ruling Democrats. At the same time, Gingrich rose to the number two minority position, signaling a more combative approach in dealing with the Democrats.

And Michel warned Republicans not to let their newfound power corrupt them.

Michel came from a district that included Peoria and had three congressmen over 60 years — Everett Dirksen, Harold Velde and Michel, who worked as an aide to Velde before being elected to the seat. Republicans looked as though they might claim the majority in 1982, but a public debate over the question of Social Security cuts led to Democratic gains in that election. Michel held Republicans in the House together and was able to provide critical help to Republican presidents and their initiatives.

Robert Michel was born in Peoria, Ill., on March 2, 1923. During World War II, he served in Europe and received a Purple Heart and a Bronze Star. In 1949, he served as a congressional aide to Rep. Velde and in 1956 he was elected to the House, winning re-election 18 more times.

Michel had an easygoing style. He met his wife at Bradley University, where he sang on the chorus. Michel was known for his singing voice and on occasion would serenade his congressional colleagues.

After leaving Congress, Michel joined a lobbying firm and worked successfully to double the funding for the National Institutes of Health. Michel and his wife Corrine, who died before him, had four children, five grandchildren and two great-grandchildren.

At a presentation of a congressional distinguished service award, Michel recalled a warning from his parents about entering politics.

“I decided upon embarking upon a career in politics without the blessing of my parents,” Michel recalled. “I remember dad and mother telling me, why would you want to get involved in this dirty, rotten, nasty game of politics? And I had to respond to my mom and dad, ‘Folks, you’ve taught me the difference between right and wrong.'”
Copyright 2017 The Associated Press. All rights reserved. This material may not be published, broadcast, rewritten or redistributed.