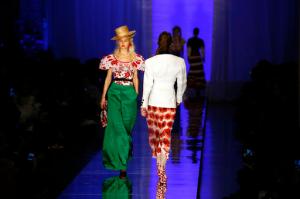 PARIS (AP) — All eyes in Paris were on the debut solo couture display from Valentino designer Pierpaolo Piccioli following the move of his design partner to Dior.

And if the rousing applause was any indication, his sublime styles of ethereal goddesses were a hit for the guests that included Kristin Scott Thomas, “La Vie en Rose” actress Clotilde Courau and fashion maestro Valentino Garavani himself.

Here are the highlights Wednesday of the spring-summer 2017 collections.

As the first look floated by in billowing floor-length ivory crepe entitled “Euridice” — after the Greek nymph — it was clear this show would be a study in divine proportions.

It was the simplicity, and almost the fragility, of the gowns that made this collection sing. Overly long lengths of chiffon, crepe and silk jersey used in the skirts elongated and narrowed the models’ bodies.

But the classical styles — in muted tones with provocative flashes of bright red — were deceptively simple. Subtle, complex twists included Piccioli’s use of sections of penumbra tulle, or slashed shoulders. It was sensual, as opposed to sexual — and all the more powerful for it.

The soundtrack by Hollywood movie composer Alexandre Desplat added to the dramatic aura of the 59 looks and left the audience visibly moved.

As if the couture designs and the sparkling chandeliers at the Hotel Salomon de Rothschild weren’t quite enough, Valentino also treated its guests to a contemporary art show Wednesday.

Hanging on the walls of the lavish 19th century Paris manor house were huge canvasses of figurative and abstract art.

Fashion insiders were snapping their cameras at the walls as well as the clothes.

It was all about 1980s’ excess for Jean Paul Gaultier — who paid homage to that decade in which he creatively came of age.

The big hair, oversize scruffy plaits, satin headscarves, strong shoulders, pinstripes, lashings of denim and stockings in acid yellow, blue and red — were all staples of the 80s. They were given a further injection of boldness when the decor faded from light to bright blue and then to warm brown.

“I wanted to make it graphic — to use color to make an effect … the city is gray,” Gaultier told The Associated Press.

The exuberant designer is never one to be restricted by just one era or style. Brigitte Bardot-like exposed midriffs and gypsy sleeves from the 1960s mixed with the signature Breton striped blouse and corseted bustier.

His biggest statement was in the dazzling, dizzy mix of stripes and bright prints that screamed “more is more.”

SORBIER SAYS IT WITH FLOWERS

Dancer-models emerged in large brown paper wraps for the presentation in an old theater, then dramatically tore them into pieces and threw them to the floor. Beneath, sprightly nymph-like gowns in sepia colors frothed weightlessly as the models performed fairy-like pirouettes and prowled around the space.

The original display was fitting celebration that marked 30 years since the founding of the independent couture house. It’s a rarity in a celebrity-driven industry dominated by corporate groups such as LVMH and Kering.

Elie Saab’s accomplished couture display towed the line perfectly between the decorative and subtle, and never wandered into excess.

In feminine pastel shades, peach gently contrasted with mid-blue, while plays on sheer sections in see-through full skirts created a feeling of hidden depth in many of the styles.

Glamour, of course, was the order of the day for Saab, one of couture week’s red-carpet favorites.

Thomas Adamson can be followed at Twitter.comThomasAdamson_K

Amy Seraphin in Paris contributed to this report
Copyright 2017 The Associated Press. All rights reserved. This material may not be published, broadcast, rewritten or redistributed.