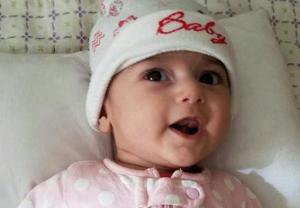 This undated photo provided by OHSU Doernbecher and the Reshad Family shows Fatemeh Reshad, an infant from Iran with a life-threatening heart condition, who will be treated at OHSU Doernbecher Children’s Hospital in Portland, Ore. Fatemeh, who is in need of life-saving heart surgery arrived Tuesday, Feb. 7, 2017, at the Portland hospital with her family. The family of the 4-month-old chose Portland because of proximity to relatives and because of OHSU’s expertise in treatment of the heart condition. (OHSU/Reshad Family Photo via AP)

PORTLAND, Ore. (AP) — An Iranian infant in need of life-saving heart surgery arrived Tuesday at a Portland hospital with her family after being temporarily banned from coming to the U.S. by President Donald Trump’s immigration orders.

Iranian doctors told Fatemeh Reshad’s parents weeks ago that she needed at least one urgent surgery to correct serious heart defects, or she will die, according to her uncle, Samad Taghizadeh, a U.S. citizen who lives in Portland.

The family previously had an appointment in Dubai to get a tourist visa. But it was abruptly canceled after Trump announced his executive order banning the entry of people from seven countries with Muslim majorities. The girl and her parents had to return to Iran.

A Seattle judge issued a temporary restraining order on the ban the same day a waiver was granted for the baby.

“Fatemeh looks well,” said Dr. Laurie Armsby, interim head of the Division of Pediatric Cardiology at OHSU Doernbecher Children’s Hospital. “Our tests this morning have confirmed her diagnosis and the urgent need for treatment.”

U.S. Sen. Jeff Merkley, an Oregon Democrat, was instrumental in getting the waiver for the baby’s family, as were New York Gov. Andrew Cuomo and immigration attorneys.

The hospital issued a statement saying that the family “would like to extend their heartfelt thanks to everyone who helped make their trip possible. The family would like to give special thanks to the congressional delegations and governors of Oregon and New York.”

Jennifer Morrissey, a Portland immigration attorney who championed the baby’s cause, said “This was truly a team effort to beat the clock, given the medical and legal hurdles Fatemeh was facing.”

The family of the 4-month-old chose Portland because of its proximity to relatives and because of OHSU’s expertise in treatment of the heart condition.

Armsby said the infant’s heart condition had “resulted in injury to her lungs” but there is time “to reverse this process.”

The hospital said treatment would begin with a cardiac catheterization, performed by Armsby, followed by a five- to six-hour surgical procedure performed by Dr. Irving Shen, a nationally respected expert on Fatemeh’s condition.
Copyright 2017 The Associated Press. All rights reserved. This material may not be published, broadcast, rewritten or redistributed.