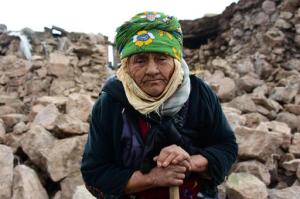 An villager stands in front of her damaged house after two earthquakes, both with preliminary magnitudes of 5.3, jolted Turkey’s northern Aegean coast, in Yukarikoy village Canakkale province, Monday, Feb. 6, 2017, damaging dozens of homes in at least five villages and injuring several people.(Mustafa Suicmez/DHA-Depo Photos via AP)

The first quake, which was centered beneath the Aegean off the coast of the town of Ayvacik in Turkey’s northwestern Canakkale province, struck at 6:51 a.m. (0351 GMT), according to the government’s crisis management agency. The second temblor hit at 1:58 p.m. (1058 GMT) and was centered in Ayvacik.

More than a hundred aftershocks were recorded in the region Monday, the strongest measuring magnitude 4.4, Turkey’s state-run Anadolu Agency reported.

Orhan Tavli, the governor for Canakkale, said 40 homes were damaged in the worst-hit village of Yukarikoy, near Ayvacik. Some 50 homes in 10 other nearby villages were also affected.

“Praise God, there was no loss of life,” Tavli told reporters during a visit to Yukarikoy. “We have five injured people. They are still being treated.”

Tents were being dispatched to temporarily house those whose homes were damaged, he added.

Earthquakes are common in Turkey, which sits on top of active fault lines