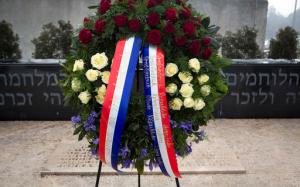 A wreath from Croatia’s president, prime minister and the parliament speaker is laid at the monument for Jewish victims of WWII at “Mirogoj” cemetery in Zagreb, Friday, Jan. 27, 2017. Croatia’s Jewish groups have boycotted the official Holocaust Remembrance Day ceremonies saying the conservative government is not doing enough to curb pro-Nazi sentiments in the country. (AP Photo/Darko Bandic)

Ognjen Kraus, the coordinator of the Jewish communities in Croatia, said the decision was made after authorities failed to remove a plaque bearing a World War II Croatian pro-Nazi salute from the town of Jasenovac. The town is the site of a wartime death camp where tens of thousands of Jews, Serbs and Roma perished.

“This should have been solved urgently, with a government decree or a law, but nothing happened,” Kraus told The Associated Press. “Instead, we are witnessing an escalation … And who is going to stop it?”

The Jewish community also boycotted a commemoration in Jasenovac last year. On Friday, a Croatian state delegation laid a wreath at a Jewish memorial in Zagreb.

The “For the homeland — Ready!” battle salute was used by WWII Croatian fascist troops of the pro-Nazi puppet regime established during the war. The salute was inscribed on the plaque in Jasenovac honoring Croatian fighters killed in the 1990s and veteran groups have announced plans to install more such plaques.

Also recently, a school in the coastal town of Sibenik banned an Anne Frank exhibition because it was angered over its portrayal of WWII Croatia.

Prime Minister Andrej Plenkovic — who was on a state visit to Israel earlier this week — has described the Jasenovac plaque issue as “delicate.” He has promised to set up a commission to deal with Croatia’s past.

“Do we really need to discuss this in 2017?” Kraus asked. He explained that “For the homeland — Ready!” was inscribed on the orders that sent people to camps in WWII Croatia.

“It isn’t just a salute, it is much, much more,” said Kraus.