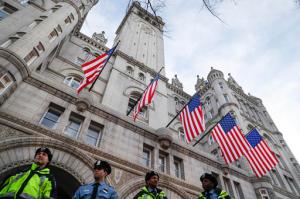 In this Jan. 19, 2017, photo, police stand guard outside the Trump International Hotel on Pennsylvania Avenue in Washington. While President Donald Trump’s hotel in Washington did serve as a hub of inaugural activities it also stands as ground zero for what top Democrats and some ethics advisers see as his unique web of conflicts of interest. Trump’s lease with the federal government to develop and operate a hotel inside the historic Old Post Office building expressly prohibits any elected official from benefiting from the property, yet Trump has not divested from his company or this particular project. (AP Photo/John Minchillo)

WASHINGTON (AP) — Red, white and blue balloons rained down over crystal chandeliers in the soaring atrium of the Trump International Hotel at midnight in “a new inaugural tradition,” its social media account promised.

But while President Donald Trump’s hotel in Washington did serve as a hub of Friday’s inaugural activities, it also stands as ground zero for what top Democrats and some ethics advisers see as his unique web of conflicts of interest.

Trump’s lease with the federal government to develop and operate a hotel inside the historic Old Post Office building expressly prohibits any elected official from benefiting from the property, yet Trump has not divested from his company or this particular project.

The government’s General Services Administration previously said it would refrain from commenting on the apparent contract violation until Trump took office, which he did at noon Friday. The agency did not respond to requests for comment.

“I think it’s a simple matter of amending the lease,” said Patrick Keogh, a real estate investor in Austin, Texas, who has developed projects for the GSA and other federal agencies. He said Ivanka Trump, the president’s daughter and chief negotiator on the hotel, should ask the GSA to exempt her father from that provision of the contract. The GSA should make the process public and transparent, Keogh said.

Others say Trump must relinquish ownership of the hotel. More broadly, they argue, Trump should sell off his company and put the cash into a blind trust as previous presidents have done. He is not legally required to do so, but it’s become common for presidents to separate themselves from their personal finances to avoid any possible conflicts with national policy.

The liberal-funded watchdog group Citizens for Responsibility and Ethics in Washington complained to the GSA that it should terminate its deal or take legal action because the president had violated the conditions of the lease. The American Civil Liberties Union said it had filed a Freedom of Information Act request for documents about Trump’s conflicts of interest, including any recent memos, emails and other private communications on the issue with his transition team.

The Washington hotel also attracted protesters on Friday and Saturday. People participating in the women’s march Saturday booed in unison as they walked by, and many left their protest signs in front of the building.

Trump handed control of his international real estate development, property management and licensing company to his two adult sons. To help ease the appearance of conflicts of interest, the company said it would not enter into any new international deals, promised to hire a compliance officer and ethics adviser to vet domestic deals, donate foreign profit from its hotels and refrain from doing anything that could be perceived as exploiting the office of the presidency.

“The Trump Organization has directed that no communications of the organization, including social media accounts, will reference or otherwise be tied to President-elect Trump’s role as president of the United States or the office of the presidency,” a company attorney wrote in a briefing released earlier this month.

Trump has voluntarily taken these measures, since few conflict laws apply to the president or vice president. That means people will have to trust that the president and his company are following through.

“We are waiting for you Mr. President! Thank you!” Trump’s Washington hotel wrote on its Twitter account shortly before the president was scheduled to roll past the Pennsylvania Avenue property as part of the inaugural parade. Indeed, Trump hopped out of his motorcade to walk and wave in front of the hotel.

Trump Organization representatives did not respond to requests for comment.

The new White House raised eyebrows on its first day by posting on its official website a biography of first lady Melania Trump that included an explicit reference to her jewelry collection, which it noted was sold on the home-shopping channel QVC. By Saturday, that line had been edited and simplified to say that she had “launched her own jewelry collection.”

A spokeswoman for the first lady said the website was updated out of “an abundance of caution” and that the jewelry line is no longer available in any case.

There have also been questions about what the Trump Organization means by no “new” foreign deals.

Earlier this week, the company confirmed it wanted to expand at one of its Scottish resorts, including plans to add a golf course. A spokeswoman for the resort said the expansion is just another “phase” of a project outlined in a planning document approved by the local government years ago, and so did not break any Trump promise.

But Richard Painter, chief ethics lawyer under former President George W. Bush, said every phase of a real estate project is like a new deal, requiring financing and government permits, and allowing foreigners to hold something back that the president might want in hopes he will shape public policy in their favor.

Trump’s administration addressed one potential conflict when the Justice Department on Saturday said federal anti-nepotism laws do not prevent the president from appointing his son-in-law to his administration. That clears the way for Jared Kushner, Ivanka Trump’s husband, to take a post as a senior adviser.