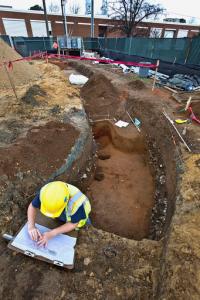 In this Jan. 17, 2017, photo, archaeologist Michele Brumfield works at the site of a new Virginia Institute of Marine Science building in Gloucester Point, Va. Archaeologists nearing the end of a prolonged Gloucester Point dig were rewarded for their doggedness this past week when they unearthed one of the most noteworthy caches of Revolutionary War artifacts to be found in the region in years. (Joe Fudge/The Daily Press via AP)

GLOUCERSTER POINT, Va. (AP) — Archaeologists nearing the end of a prolonged Gloucester Point dig were rewarded for their doggedness this past week when they unearthed one of the most noteworthy caches of Revolutionary War artifacts to be found in the region in years.

Slowed at first by stubbornly compacted soil — then by a dense layer of unusually large oyster shells — the team excavating the site of a new Virginia Institute of Marine Science building was probing one of the last targets of their 10-month-long excavation when they began uncovering a trail of French infantry buttons and English and Spanish coins.

Then archaeologist Michele Brumfield discovered an ancient brass plate that at first looked unmarked — yet when turned over and brushed off a few seconds later revealed the engraving: “Lt. Dickson, 80th Regt. of Foot.”

Though slightly bent and much discolored now, the name plate once marked a piece of luggage belonging to a prominent young officer of the Royal Edinburgh Volunteers, who fortified, defended and ultimately surrendered Gloucester Point to American and French forces during the 1781 Siege of Yorktown.

His regiment had previously served in Gen. Lord Cornwallis’ summer campaign through the Southern colonies, and one of its senior officers helped write the Articles of Capitulation when the British gave themselves up.

“When we started on this trench, I wanted it to be done. We’ve been digging here a long time,” Brumfield said, describing the sounds of construction that have been ringing in the archaeologists’ ears for months.

“Then we found this — and it turned out to be very exciting. We were giddy when we saw the inscription.”

Link to the past

Commissioned as part of an $11 million construction project, the excavation began in March 2016 with a preliminary survey of the 2-acre-plus site using ground-penetrating radar.

Archaeologists from DATA Investigations also conducted tests of the areas slated for the new building’s footings, uncovering almost right away evidence of two boundary ditches, a trio of Civil War trash pits and a pair of 18th-century structures linked to the once-bustling colonial port known as Gloucester Town.

Densely compacted during the 1983 construction of a parking lot, the hard, tightly bound clay slowed the excavation from the beginning, DATA co-owner Dave Brown said, describing how hard digging added weeks to the project.

Then there was the discovery of more than 640 features ranging from postholes, trash pits and boundary ditches to the artifact-filled cellars of post-in-ground structures.

“The sheer volume of features we uncovered was much greater than anticipated,” Brown said.

Mapped in 1608, Gloucester Point became the site of a pioneering tobacco warehouse in 1633 and was fortified against Dutch raiders in the late 1600s.

By the early 1700s, it had grown into one of Virginia’s most developed and affluent towns, rivaling its sister settlement of Yorktown on the other side of the York River because of the region’s unusually fertile tobacco plantations.

Fortified again during the Revolution and the Civil War, the site has provided a rich stream of archaeological evidence since the first excavations were conducted here during the early 1970s, Brown said.

But even though he and partner Thane Harpole knew the project had the potential to tie together the findings of two previous digs on flanking pieces of land, they were still just as surprised as their archaeologists when a cellar first identified in 1990 but never explored began coughing up a rich stream of artifacts from the early 1780s.

“And when your goal is to explain the significance of this site, finding something like this brass plate is insanely important. It gives you a personal connection to what happened here.”

Among the other Revolutionary War-era items found in the 13-foot-long cellar are four French infantry buttons, an English half-penny dated 1773, a silver piece of eight, two matching shoe buckles and such pieces of brass hardware as a drawer pull and a lock plate.

“We think they were all deposited during some sort of post-Revolution cleanup,” Staff Archaeologist Anna Rhodes says.

“But the crowning artifact is the name plate, which would have marked a piece of Lt. Dickson’s luggage.”

Dickson’s 80th Regiment of Foot was the first British unit to land at Gloucester Point when Cornwallis moved his army up the York River in late July 1781.

Though worn out and sick after their service in the prolonged Southern campaign, the Royal Edinburgh Volunteers — as the regiment was also known — set about fortifying their critical position overlooking the York River even before work began at Yorktown, writes historian Charles E. Hatch Jr. in a 1940 issue of the William and Mary Quarterly.

They also foraged in the countryside alongside the notorious Loyalist troopers of Lt. Col. Banestre Tarleton and Lt. Col. James Simcoe before — just 16 days after fending off French and American forces at the Oct. 3 Battle of the Hook — reluctantly surrendering with Cornwallis.

Preliminary research by Mathews historian and genealogist Lori Jackson Black has identified Dickson as Lt. James Dickson, a member of a prominent Edinburgh family who joined the Volunteers in 1778, sailed to New York the following year and saw action with Cornwallis’ army in such clashes as the July 6, 1781, Battle of Green Spring near Williamsburg.

He survived the siege to have descendants, including a branch of the family that immigrated to Canada and now has members living in Greensboro, North Carolina.

Craig Chadwick and his wife, Janine, were flabbergasted when Black — who learned about the find through her ties to the Gloucester-based preservation group The Fairfield Foundation — shared the unexpected news through a post on Ancestry.com.

“It’s just amazing. We had no clue he’d been at Gloucester Point,” Janine told the Daily Press.

“I literally have chills.”
Copyright 2017 The Associated Press. All rights reserved. This material may not be published, broadcast, rewritten or redistributed