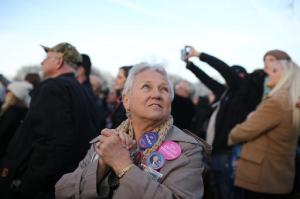 Amy Schramik of St. Petersburg, Fla. reacts to Donald Trump’s appearance at a free concert on the grounds of the Lincoln Memorial and the Reflecting Pool on Thursday, January 19, 2017. Schramik was an assistant co-chair to the Hillsborough County Donald Trump Campaign. Formerly a Democrat, she converted to Republic in January 2015 so she could vote to nominate Trump. “I honestly think he’s going to try to deliver what he promised. Deliver on his promises. Jobs. I’m not sure how much a president can do about jobs. The businesses are out there or they’re not. He’s got to come through on his promises,” she said. (Charlie Kaijo/The Tampa Bay Times via AP)

WASHINGTON (AP) — Behind in the polls in late October, Donald Trump ventured to Gettysburg, Pennsylvania, to give American voters a “contract” detailing what he would achieve during his first day in office. Beneath a list of 18 major actions was the flourish of Trump’s familiar signature and a blank space for voters to sign.

But as Trump becomes president on Friday, January 20th, it remains hazy as to which actions he will immediately take.

The list included several items likely to fire up Republican voters but backed up by scant policy. It includes “begin removing the more than 2 million criminal illegal immigrants” and “cancel every unconstitutional executive action … by President Obama.” Trump has already backed down from one pledge to label China a currency manipulator, recently saying he would first like to speak with the Chinese leadership.

A look at 10 of the key promises Trump made for his first day as president:

—Freeze hiring for the federal government to reduce payrolls, although the military, public safety and public health agencies would be exempt.

—Ban White House and congressional officials from becoming lobbyists for five years after they leave the government.

—Announce plans to renegotiate the North American Free Trade Agreement with Canada and Mexico or withdraw from the deal.

—Formally withdraw from the Trans-Pacific Partnership.

—Lift restrictions on mining coal and drilling for oil and natural gas.

—Remove any Obama-era roadblocks to energy projects such as the Keystone XL pipeline.

—Suspend immigration from regions associated with terrorism where vetting is difficult.
Copyright 2017 The Associated Press. All rights reserved. This material may not be published, broadcast, rewritten or redistributed.