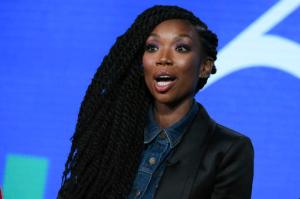 FILE – In this Jan. 6, 2016, file photo, recording artist and actress Brandy Norwood speaks during the “Zoe Ever After” panel at the Viacom 2016 Winter TCA in Pasadena, Calif. Brandy performed a medley of some of her biggest hits after receiving the “Lady of Soul” award at the Soul Train Awards on Nov. 27, 2016. (Photo by Richard Shotwell/Invision/AP, File)

LAS VEGAS (AP) — The Soul Train Awards has served up a night of nostalgia with performances by Brandy and Dru Hill, two artists who dominated the R&B scene in the 1990s.

After receiving the Lady of Soul award from Jill Scott, Brandy performed a medley of some of her biggest hits, including “The Boy Is Mine” and “I Wanna Be Down.” Mase joined her on stage for their duet, “Top of the World.”

The show opened with a Dru Hill reunion that featured some of their hits, including “In My Bed” and “Beauty.” Lead singer Sisqo performed his 1999 smash hit, “Thong Song.”

As for the awards at the Sunday ceremony in Las Vegas, Beyonce dominated the night with four trophies, including best R&B/soul female artist and album of the year for “Lemonade.”
Copyright 2016 The Associated Press. All rights reserved. This material may not be published, broadcast, rewritten or redistributed.