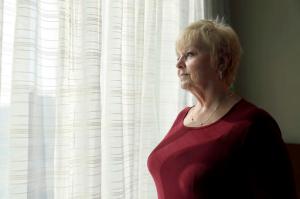 Deborah Giannecchini, of Modesto, Cailf., poses for a photo Friday, Oct. 28, 2016, in St. Louis. A jury has awarded Giannecchini more than $70 million in her lawsuit alleging that years of using Johnson & Johnson’s baby powder caused her cancer, the latest case raising concerns about the health ramifications of extended talcum powder use. (AP Photo/Jeff Roberson)

ST. LOUIS (AP) — When Deborah Giannecchini was diagnosed with stage 4 ovarian cancer four years ago, it didn’t make sense. She had no family history, nor did she seem a high risk.

But months later, when her daughter saw a TV ad for a law firm asking ovarian cancer victims who used talcum powder to come forward, Giannecchini realized a possible link: She had been using Johnson & Johnson’s baby powder for most of her life.

On Thursday, a St. Louis jury awarded more than $70 million to Giannecchini, of Modesto, California, wrapping up a monthlong trial. It was the third big verdict awarded by a St. Louis jury against Johnson & Johnson in ovarian cancer lawsuits this year. Combined, the three awards amount to nearly $200 million.

Giannecchini said she was happy with the verdict, but it doesn’t make up for the cancer fight and ongoing health problems caused by chemotherapy.

“There’s not enough money in the world to pay for fighting the cancer,” she said at a news conference arranged by her lawyers.

A spokeswoman for Johnson & Johnson said in a statement that while the company sympathizes with women and their families impacted by ovarian cancer, it will appeal the latest verdict “because we are guided by the science, which supports the safety of Johnson’s Baby Powder.”

About 2,000 women nationwide have filed similar suits over concerns about health damage caused by extended talcum powder use. Lawyers are reviewing many additional cases, many of them generated by television ads by law firms.

In February, a St. Louis jury awarded $72 million to relatives of an Alabama woman who died of ovarian cancer. Another jury awarded $55 million in May to a South Dakota survivor of the disease.

But two cases in New Jersey were thrown out by a judge who said there wasn’t reliable evidence that talc leads to ovarian cancer, an often fatal but relatively rare form of cancer.

Ovarian cancer accounts for about 22,000 of the 1.7 million new cases of cancer expected to be diagnosed in the U.S. this year. Factors known to increase a women’s risk of ovarian cancer include age, obesity, use of estrogen therapy after menopause, not having any children, certain genetic mutations and personal or family history of breast or ovarian cancer.

Talc is a mineral that is mined from deposits around the world, including the U.S. The softest of minerals, it’s crushed into a white powder. It’s been widely used in cosmetics and other personal care products to absorb moisture since at least 1894, when Johnson & Johnson’s baby powder was launched. But it’s mainly used in a variety of other products, including paint and plastics.

Much research has found no link or a weak one between ovarian cancer and using baby powder for feminine hygiene, and most major health groups have declared talc harmless. Still, the International Agency for Research on Cancer classifies genital use of talc as “possibly carcinogenic.”

Attorneys with Onder, Shelton, O’Leary & Peterson, the firm that handled all three St. Louis cases, cited other research that began connecting talcum powder to ovarian cancer in the 1970s. They cite case studies showing that women who regularly use talc on their genital area face up to a 40 percent higher risk of developing ovarian cancer.

The firm has also accused Johnson & Johnson of marketing toward overweight women, blacks and Hispanics — the very same women most at-risk for ovarian cancer.

Wylie Blair, an attorney for Giannecchini, said the firm is working with about 1,700 additional plaintiffs. Another trial is scheduled for February.

Blair said there has been no talk with Johnson & Johnson concerning a class-action settlement.

“Acknowledging that a seminal product that everybody identifies with the company has been causing a horrible disease for all these years is going to be a tough pill to swallow for them,” Blair said.

Giannecchini said that as of now there is no evidence of cancer, but she won’t know for years if she is free of the disease.

“One day at a time,” she said. “Just stay hopeful.”
Copyright 2016 The Associated Press. All rights reserved. This material may not be published, broadcast, rewritten or redistributed.