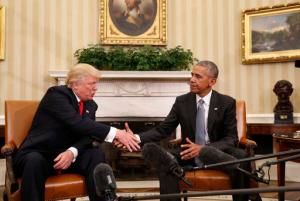 WASHINGTON (AP) — The budding new alliance between Donald Trump and congressional Republicans hides a tougher reality: Even with unified GOP control of Washington, the president-elect’s priorities may have trouble getting through Congress.

And in some cases Republicans themselves might be the barrier.

Building a border wall and restricting immigration from terror-stricken nations? Don’t count on Senate Democrats to go along, and they will effectively wield veto power in many cases.

Repealing President Barack Obama’s health care law? That looks likely to happen in some way, shape or form, but a number of states that accepted that law’s expansion of the Medicaid health program for the poor are represented by Republicans. It will take painstaking and potentially lengthy negotiations to come up with a solution.

And then there are Trump’s protectionist views on trade, skepticism about international treaty organizations and promises to protect Social Security and Medicare. All that flies in the face of Republican Party orthodoxy — and the list goes on.

Still, all that seemed like a problem for another day as Trump paid a triumphant visit to Capitol Hill on Thursday, Oct. 10, after a cordial White House meeting with President Barack Obama.

He sat down with House Speaker Paul Ryan of Wisconsin, whom he derided as “very weak and ineffective” just last month after Ryan distanced himself over audio of Trump talking about groping women. Ryan was all smiles as he escorted Trump, wife Melania and Vice President-elect Mike Pence onto the Capitol Balcony to give them a view of the inauguration platform being constructed for Trump to take the oath of office Jan. 20.

From there Trump strolled through the Capitol’s stately Ohio Clock Corridor with Senate Majority Leader Mitch McConnell of Kentucky, who’d been quick to endorse him but critical of his rhetoric and undisciplined campaign style. But it was McConnell’s strategy of refusing to act after the death of Justice Antonin Scalia in February that now hands Trump a Supreme Court vacancy to fill.

And on Thursday, Oct. 10, there was no sign of strain. The normally reserved McConnell even seemed to adopt Trump’s hyperbolic rhetorical style, declaring their encounter “a first-class meeting.”

Ryan, for his part, picked up Trump’s campaign slogan, telling reporters: “We are now talking about how to hit the ground running, and make sure we get this country turned around, and make America great again.”

As he left the Capitol, Trump was asked about his legislative priorities.

As for specifics, there were none. But Trump’s ability to deliver on his extravagant campaign promises to change Washington and rebuild the nation will require passing laws, a tedious process not built for instant gratification.

He will be able to take some steps through unilateral, executive actions, a method Republicans repeatedly accused Obama of overusing. But big-ticket items like tax cuts and infrastructure spending, and most major policy changes on immigration, health care, energy or trade, would require Congress’ say-so. And although Republicans control the House, they will have only 52 seats in the 100-member Senate next year, well short of the 60 votes needed to advance most legislation.

“Many of his proposals would face a certain filibuster in the Senate,” predicted Jim Manley, a Democratic consultant and former top Senate aide.

So the gatekeeper on much of Trump’s agenda may end up being New York Sen. Chuck Schumer, who will take over as the Democrats’ Senate leader in the new Congress. Schumer has had little to say since the election, beyond issuing a short statement congratulating Trump, though the two have spoken on the phone. But few expect Schumer and his Democrats to sign on to too many of Trump’s plans.

And the areas where Democrats see most initial agreement with Trump — on infrastructure spending, for instance, or his proposal for paid family leave — may run into problems from congressional conservatives reluctant to go along with big government spending.

Even as GOP leaders pledged to work together with Trump, there were signs of policy differences.

At a post-election news conference, McConnell declined to endorse Trump’s signature border wall with Mexico. Ryan, in an interview on Fox News Channel, talked about “serious problems” with Medicare, an issue he’s addressed in the past with a top-to-bottom overhaul for which Trump has shown no enthusiasm.

And on trade, Trump has denounced the 12-nation Trans-Pacific Partnership negotiated by the Obama administration, and both McConnell and Ryan have indicated it won’t come to a vote before Obama leaves office. Yet some establishment Republicans remain convinced that some kind of deal is sorely needed.

“The big question is trade. Gotta have trade,” said GOP Sen. Pat Roberts of Kansas, who chairs the Agriculture Committee. Roberts said “mounds of grain” are sitting on the ground in Kansas, waiting for customers.

“Gotta export. And with that, it’s preferable to have a trade bill,” Roberts said, adding of Trump: “I don’t think he’s opposed to trade bills. He just wants trade bills where he feels we get an equal shake. So, we’ll work on it.”