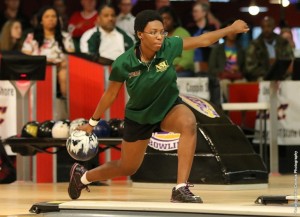 MIDLOTHIAN, Va. – Norfolk State opened up its 2016-17 campaign by finishing second at the Virginia Union Invitational this weekend. The No. 23 Spartan bowling team tallied a 13-1 overall record and did not lose a match until falling in the tournament final.

The Spartans won all six matches on Friday in Baker action and followed that up with five wins in five contests on Saturday in team play. NSU also won twice on Sunday, but No. 20 Saint Francis Brooklyn took the best-of-7 Baker match against the Spartans to capture first place in the tournament.

Despite coming up short in the end, NSU still had the highest pinfall total in the tournament prior to Sunday’s bracket round. The Spartans averaged 183.8 in 12 total games and posted a total pinfall of 11,026, 10 total pins ahead of Saint Francis Brooklyn. The Terriers also went 13-1 in the tournament, with NSU handing them their only loss on Saturday.

In traditional play on Saturday, junior Briana Gardner posted the highest individual average among her Spartan teammates with a 190.6. Sophomore Alexa Rodriguez bowled in all five games as well and bowled a 187.2 average. Freshman Aubrey Conrad was the third of three NSU bowlers to compete in all five games, where she averaged 177.0.

Sophomore Yarelis Burgos (175.8) and junior Meagan Marciano (174.5) each competed in four matches, and freshman Jasmin Whitaker also made her collegiate debut by rolling a 175.5 in two games.

On Sunday, Norfolk State bowled one more Baker match, a 930-900 takedown of Mount Aloysius, before the start of bracket play. The No. 1 seed Spartans needed a few extra rolls to defeat Virginia State after the two teams had tied in the second of seven games in their best-of-seven series. The Trojans actually won the last two games to force a tiebreaker, which NSU took by a 94-74 margin.

But in the championship match against No. 2 seed Saint Francis Brooklyn, the Terriers won the last three games to win by a 4-2 margin to capture the tournament title.

This weekend NSU will host the MEAC Southern Divisional, the first of three on the year, at the AMF Lanes in Chesapeake on both Saturday and Sunday in the first official conference games of the season.