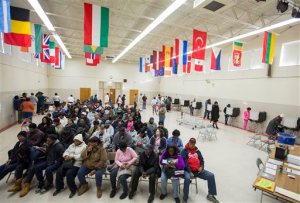 Voters sit in rows of chairs at Rosemont Middle School as they wait their turn to cast their ballots on Election Day in Norfolk, Va., Tuesday, Nov. 8, 2016. (Bill Tiernan/The Virginian-Pilot via AP)

Virginians went to the polls Tuesday, Nov. 8, with 13 electoral votes at stake in the presidential election and to decide several House seats. Here are the voices of some of those voters.

This election is a crossroads for mountain communities, said Doug Ratliff, a 67-year-old businessman in Richlands, an Appalachian town in rural southwestern Virginia, where the coal industry has collapsed and hopelessness is setting in.

“We will slowly die. The population is moving out, there’s no jobs, no future for the kids if Hillary Clinton is elected,” said Ratliff. “If Donald Trump is, we have a chance. And we’re willing to work for it. But we’ve got to have help and change. And not the hope and change as Obama gave it.”

Ratliff has hauled coal, taught school and now owns strip malls. He’s angry at both Democrats and Republicans he says have forsaken rural, working-class America. He changed his voter registration from Republican to independent in protest.

She was concerned about relatives posting untrue information about Hillary Clinton on Facebook, so she chimed in to support her candidate. She was attacked with condemnation, personal attacks and vitriol.

People are angry, scared about the future. They’re taking this election more personally than she’s ever seen. But a week ago, she went to a funeral and saw some of the same people. She was relieved that they hugged and comforted each other despite their political conflicts. She hopes that means the nation will do the same once the election is over.

“We found out that people still love one another and are still good to each other,” she said. “This will pass, the election will pass, and our county will heal and move on.”

Her husband, Paul, who is running for town council, believes the country has withstood worse divides (during the Vietnam War, he said) and found a way to mend.

The lawn outside the Richlands Police Department where they cast their ballots is filled with dozens of Trump signs, with one Clinton sign in a corner. Both Crawfords come from a long line of coal miners, a group that has largely coalesced around Trump and his promise to fix their failing industry. But Paul Crawford, who has worked as a miner and at an automotive supply company, rejects Trump’s overtures to the white working class. Throughout his career, he said, his life has improved under Democratic presidents.

And he believes Trump appeals to desperate people’s worst instincts to blame outsiders and believe in conspiracies.

There was no anguished, lesser-of-two-evils choice for Jackie Stephens, 69, a retiree from Ashburn. She called her Clinton choice “easy-peasy.”

“She has the experience, the intelligence. She was first lady, senator, secretary of state,” she said.

As for Trump: “Words fail me.”

Stephens said she was put off by Comstock’s late move to repudiate Trump.

“Comstock can’t just change horses in the middle of the race,” she said. “It was ‘I’m for him until it hurts me to be for him.'”

G-H Qamar Baloch, a retired linguist from Ashburn, said it wasn’t that long ago that Americans were greeted warmly in his native Pakistan.

But now, he tells his son, a Marine Corps veteran, not to tell people he’s an American when he travels there. U.S.-Pakistani relations, and foreign affairs generally, were on Baloch’s mind Tuesday as he voted for Clinton.

He said he goes for qualifications, and Trump doesn’t have any. He also questioned Trump’s commitment, wondering whether he “might be out sleeping with some ladies — escorts” if a crisis occurred in the middle of the night.

Party politics weren’t especially important to him. In a closely watched House race, he voted for Republican incumbent Barbara Comstock.

Pierce, who is black, acknowledged that there is some concern in the African-American community over Clinton’s backing of stiff jail sentences in the 1990s, which affected many black men.

“But I believe that she will do that which is good by the black people,” Pierce said. “She’s going to try to keep the standards that President Obama created.”

Joseph Gatlin, 56, a Republican who moved to the U.S. from Israel 30 years ago, said he’s voting for Trump because the nation needs a businessman.

“I think that he has his flaws like everybody else. But it’s a chance to bring the country back to what we need to be. Right now we’re losing respect around the world,” said Gatlin, who owns a flooring company.

Immigration is the top priority because terrorists and “all the haters of America” are allowed to come in. He called Israel’s border fences effective and said the U.S. should take similar measures.

Gatlin called Clinton corrupt and the political system rigged. “If Trump loses, and it’s been proven that he loses fair and square, then he should call her and concede,” he said. “But right now I don’t trust the system at all.”

Jean Montague, 48, voted for Clinton and brought along her 8-year-old son, Jaden Bryant.

“He came to make sure I didn’t vote for Trump,” she joked. But actually, as a gay woman, she said, the decision was easy.

A computer programmer and business owner who recently relocated to suburban Richmond from Texas, Montague said Trump “made fun of a disabled reporter, and he makes fun of people he thinks are weaker.

“If he’s going to discriminate against people who are disabled or a different race, he’s going to automatically disagree with my lifestyle.”

Tharish Harris got emotional after casting her ballot for Clinton in the Church Hill neighborhood of Richmond. The 36-year-old who teaches English in a public school said “it’s time for the glass ceiling to be broken for women.”

“It’s emotional to actually get to vote for a woman as president,” Harris said. “People have been throwing a lot of hate at her and I think it’s unfair and unjust, but she’s still there and she’s going to win.”

Judy Lee-Tiller, 64, voted on Richmond’s west side. She’s a registered Democrat and said her mind has been made up since Clinton became the nominee. “There was no back and forth,” she said.

Also, it’s a “nice feeling” having a female nominee, she said, comparing it to Obama’s election as the first African-American president.

Joe Hudson, 49, an engineer and registered Republican from Virginia Beach, said he’s voting for Trump because “we’re not taking care of our own people.”

“We have our fingers in too many baskets. We’re trying to be too involved in world politics. And our country is imploding from within,” he said.

Still, Hudson said he doubts Trump will win, and said he should concede if he loses.

“The votes are the votes,” he said. “Whoever wins, they win. And then people need to start working together. It doesn’t matter who’s in charge. There needs to be less corruption and less drama. It’s like a big soap opera. I’m embarrassed for both parties.”

Mohamed Eltayeb, 45, a Muslim cab driver in Virginia Beach, said Clinton got his vote because “she can do a lot for the country and for the schools and for health care.”

“I don’t know a lot about Trump. He’s just a businessman. I never hear him talking about the economy or education. He has no plan.”
Copyright 2016 The Associated Press. All rights reserved. This material may not be published, broadcast, rewritten or redistributed.