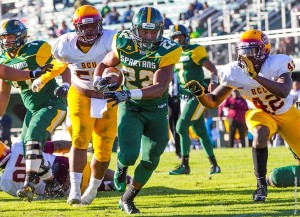 NORFOLK, Va. – Bethune-Cookman jumped out to a 14-point halftime lead, then had to stave off a late fourth-quarter Norfolk State rally to down the Spartans, 21-14, on Saturday afternoon at Dick Price Stadium.

B-CU broke a 7-all tie by scoring 14 second-quarter points. NSU, which still trailed by the same 21-7 score after three quarters, rallied in the fourth quarter. Quintreil Chung‘s 4-yard touchdown run with 10:39 left in the game cut the Spartans’ deficit in half.

It appeared the Spartans would run out of chances later in the period when quarterback Greg Hankerson was stopped for a loss on 4th-and-2 from the NSU 45-yard line with 4:39 left. But after the change of possession, NSU forced a three-and-out, bringing on Bethune-Cookman’s Jonathan Cagle.

Cagle bobbled the snap and was under a heavy rush when he attempted a pass which was intercepted by NSU defensive end Nigel Chavis, giving NSU the ball at the Wildcats’ 36 with 1:57 remaining. The Spartans then reached the B-CU 12 yard-line after a run of 14 yards by Gerard Johnson and a 10-yard completion from Hankerson to James Church.

But a fumble following a sack of Hankerson and a penalty on the Spartans backed them up to the 27-yard line. After two incompletions, Hankerson found Johnson for a completion, but it went only 14 yards on a 4th-and-25 play. That turned the ball over to B-CU on downs and enabled the Wildcats to run out the clock.

B-CU scored first as Larry Brihm found Jawill Davis on a 39-yard TD pass on a 3rd and-29 play with 8:16 remaining in the first quarter. The Spartans wasted no time in tying the game, however. Hankerson capped a short 49-yard scoring drive with an electrifying 43-yard touchdown run where he broke several tackles and outraced the B-CU secondary for the tying score with 6:38 left in the period.

The Spartan defense was strong in defeat. Chavis had a career-high 12 tackles, three for a loss, to go with one sack and an interception. Linebackers T.C. Livingston (11) and Kyle Archie (10) both also reached double figures in tackles. Harry Freeman and Sandy Chapman added interceptions as NSU picked off a season-best three passes.

The Spartans cap the home portion of their schedule next Saturday, when they host Morgan State for Homecoming and Senior Day. Kickoff is at 2 p.m.