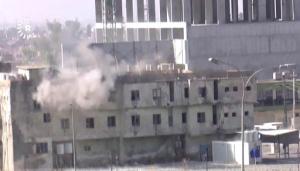 In this image made from video, smoke rises from a building where two militants are believed to be holed up, according to Rudaw TV, in Kirkuk, Iraq, Friday, Oct. 21, 2016. Militants armed with assault rifles and explosives attacked targets in and around the northern Iraqi city of Kirkuk early on Friday in an assault quickly claimed by the Islamic State group and likely aimed at diverting authorities’ attention for the battle to retake IS-held Mosul. (Rudaw TV via AP)

KIRKUK, Iraq (AP) — Islamic State militants armed with assault rifles and explosives attacked targets in and around the northern Iraqi city of Kirkuk early Friday, in an assault that appeared aimed at diverting Iraqi security forces from a massive offensive against the IS-held city of Mosul.

At least 13 workers, including four Iranians, were killed when IS militants stormed a power plant north of Kirkuk and then blew themselves up.

Multiple explosions meanwhile rocked the city and gun battles were ongoing, said witnesses in Kirkuk, speaking on condition of anonymity as they were concerned for their safety. Much of the fighting was centered on a government compound in the city. They said the streets were largely deserted out of fear of militant snipers.

IS said its fighters targeted the provincial headquarters. The claim was carried by the IS-run Aamaq news agency and could not immediately be verified.

Local Kurdish television channel Rudaw aired footage showing black smoke rising over the city as extended bursts of automatic gunfire rang out. It quoted Kirkuk Gov. Najmadin Karim as saying that the militants had not seized any government buildings.

The fighting raged late into the afternoon, and heavy smoke billowed up from the area of the provincial headquarters, where clashes were underway, according to live footage on the local Terkmeneli TV channel. It was unclear what caused the blaze.

In the power plant attack, which took place in Dibis, a town north of Kirkuk, three IS suicide bombers stormed the facility and killed 13 workers, including four Iranians, before blowing themselves up as police arrived, said Maj. Ahmed Kader Ali, the Dibis police chief.

Iran’s Foreign Ministry spokesman Bahram Ghasemi condemned the Kirkuk assault, which he said killed four Iranians and wounded three others, according to the official IRNA news agency. It was not immediately clear if Iranians were targeted in other attacks.

There was no immediate word on casualties among civilians or Kurdish forces in Kirkuk city.

Kirkuk is some 170 kilometers (100 miles) from the Islamic State-held city of Mosul, where Iraqi forces have been waging a wide-scale offensive since Monday.

IS has in the past resorted to suicide bombings in and around Baghdad in response to battlefield losses elsewhere in the country. But the complex assault in Kirkuk more closely resembled those carried out by the Taliban in the Afghan capital, Kabul.

Kirkuk is some 290 kilometers (180 miles) north of Baghdad and southeast of Mosul. The oil-rich city is claimed by both Iraq’s central government and the country’s Kurdish region. Kurdish forces assumed full control of Kirkuk in the summer of 2014, as Iraq’s army and police crumbled in the face of a lightning advance by IS.

Kemal Kerkuki, a senior commander of Kurdish peshmerga forces west of Kirkuk, said the town where his base is located outside the city also came under attack early Friday, but that the base was now under control.

He said IS maintains sleeper cells in Kirkuk and the surrounding villages. “We arrested one recently and he confessed,” he said, adding that the attackers may have posed as displaced civilians in order to infiltrate the city.

Kirkuk province has absorbed hundreds of thousands of displaced people since IS first overran wide stretches of northern and western Iraq in the summer of 2014, capturing Mosul, the country’s second largest city.

Iraqi and Kurdish forces backed by a U.S.-led coalition launched a multi-pronged assault this week to retake Mosul and surrounding areas from IS. The operation is the largest undertaken by the Iraqi military since the 2003 U.S.-led invasion.

Iraqi officials said they had advanced as far as the town of Bartella, 15 kilometers (nine miles) from Mosul’s outskirts, by Thursday.

Lt. Gen. Talib Shaghati of Iraq’s elite forces held a press conference Friday a kilometer (half a mile) away from the town and insisted the special forces had “full control.” He said special forces were clearing explosives and contending with some snipers who remained in the town. Gunfire could be heard in the distance.

Elsewhere in Iraq, the country’s top Shiite cleric called on forces taking part in the Mosul offensive to protect civilians, and for residents of Mosul, a mainly Sunni city, to cooperate with security forces.

“We stress today upon our beloved fighters, as we have before on many occasions, that they exercise the greatest degree of restraint in dealing with civilians stuck in the areas where there is fighting,” the reclusive Grand Ayatollah Ali al-Sistani said in a Friday sermon read by an aide. “Protect them and prevent any harm to them by all possible means.”

Some 3,900 people, or about 650 families, have fled Mosul and the nearby Hamdaniyah district since the operation began this week, according to Adrian Edwards of the U.N. refugee agency.

Ravina Shamdasani, of the U.N. human rights office, said it had “verified information” that IS had forced 550 people to relocate to Mosul from the nearby villages of Samalia and Najafia on Monday, part of an “apparent policy of preventing civilians from escaping to areas controlled by Iraqi security forces.”

Shamdasani reiterated concerns IS could use civilians as human shields, and said the office was investigating reports that the group had killed at least 40 civilians for suspected disloyalty. She declined to elaborate on the reports, citing “security reasons.”

Follow Adam Schreck on Twitter at http://www.twitter.com/adamschreck .
Copyright 2016 The Associated Press. All rights reserved. This material may not be published, broadcast, rewritten or redistributed.