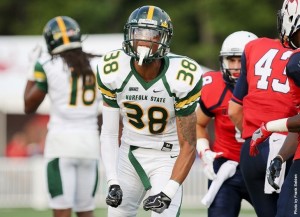 NORFOLK, Va. – The Spartans (1-5, 0-3 MEAC) return from a bye week looking to snap their five-game losing streak as they host Bethune-Cookman (0-5, 0-3) this Saturday at Dick Price Stadium. Kickoff is at 2 p.m. The game will be streamed live on ESPN3 and the Watch ESPN app, and will be broadcast on ESPNU on a tape-delayd basis at 10:30 p.m. Saturday.

1st and 10
1.    The game has been designated Military Appreciation and First Responders Day. The game will be streamed live on ESPN3 and the Watch ESPN app, and will be shown on tape-delay on ESPNU at 10:30 p.m. the same night.
2.    NSU enters the game on a five-game losing streak, its longest since a seven-game slide in 2012. The Spartans had a bye week last Saturday following a 35-0 loss at No. 18 North Carolina A&T on Thursday, Oct. 6.
3.    The Spartans were limited to 137 yards of total offense, including a season-low 26 rushing yards on 31 attempts in the loss at N.C. A&T. Aggie running back Tarik Cohen rushed for 200 yards and quarterback Lamar Raynard accounted for two touchdowns (one passing, one rushing) in the first half.
4.    NSU quarterback Greg Hankerson passed for 111 yards and rushed for a team-high 26 to lead the Spartans. Receiver Marcus Taylor and running back Gerard Johnson each tallied five receptions.
5.    Bethune-Cookman, which has finished first or tied for first in the MEAC for four straight seasons, finds itself in an unfamiliar position, heading into this week’s game with NSU winless both overall (0-5) and in the MEAC (0-3).
6.    The Wildcats have also had two games canceled or postponed this year due to inclement weather. Their season-opener with Alcorn State was suspended and won’t be made up after a thunderstorm interrupted play in the second quarter. B-CU’s game with South Carolina State on Oct. 5 was postponed to Nov. 26 due to Hurricane Matthew.
7.    In their last outing, Bethune-Cookman dropped a 52-35 decision to North Carolina A&T last Saturday. The Aggies put up 561 yards of offense behind 221 rushing yards by Cohen. B-CU quarterback Larry Brihm passed for 376 yards and four scores. The game was pushed back from Oct. 13 to Oct. 15 due to hurricane recovery efforts in Daytona Beach.
8.    In last year’s meeting, the teams combined for nearly 1,100 yards of total offense in the Wildcats’ shootout win in Daytona Beach. B-CU quarterback Quentin Williams passed for 386 yards and four touchdowns while also running for a score.
9.    NSU quarterback Greg Hankerson passed for 266 yards and four scores and also rushed for another 97 yards to lead the Spartan offense in last year’s shootout. Receiver Isaac White caught 10 passes for 126 yards and tied a school record with three touchdown catches.
10.    Despite the offensive fireworks, last year’s game was not the highest-scoring in series history. Bethune-Cookman outlasted the Spartans 63-61 in four overtimes in 2005, with the game setting NSU records for most combined points and most overtimes.

Quick Hits from N.C. A&T
Some news and notes from the loss to North Carolina A&T on Oct. 6:
• The Spartans were both held scoreless and limited to fewer than 100 yards of offense (137) for the second time this season (Richmond – lost 38-0, 122 total yards).
• North Carolina A&T marked the third ranked team NSU has faced this season. Richmond was No. 2 and William & Mary was No. 13 at the time of their meetings with the Spartans.
• The Spartans were held to 26 net rushing yards on 31 attempts, marking a season low in rushing for NSU and the team’s smallest tally since a negative-17 net output against Howard on Oct. 3, 2015.
• Gerard Johnson had a season-high five catches for 54 yards coming out of the backfield.
• The Spartans had a punt blocked resulting in a touchdown for the opponent for the second straight week.

Big Things Coming in Small Packages
Sophomore WR Marcus Taylor, the fastest player on NSU’s team, has emerged as one of the Spartans’ top threats with the ball in his hands. Taylor (5-8, 160) recorded career highs of eight receptions for 94 yards and a touchdown against North Carolina Central. He followed that up with four catches for 78 yards and another TD, covering 64 yards, against Howard the following week before finishing with five catches at North Carolina A&T. With 21, he has already matched his reception total from last season.

Taylor’s has moved up to third in the conference in receptions (3.5 per game) and is ninth in receiving yards (45.5). Taylor also ranks third in the MEAC in kick return average (21.3 yard average) and is seventh in all-purpose yards (612, 102.0 ypg).