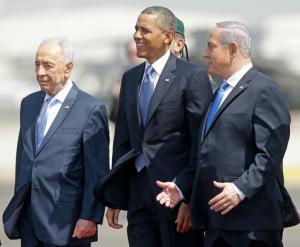 FILE – In this March 20, 2013, file photo, President Barack Obama is greeted by Israeli President Shimon Peres, left, and Israeli Prime Minister Benjamin Netanyahu upon his arrival ceremony at Ben Gurion International Airport in Tel Aviv, Israel. Shimon Peres, a former Israeli president and prime minister, whose life story mirrored that of the Jewish state and who was celebrated around the world as a Nobel prize-winning visionary who pushed his country toward peace, has died, the Israeli news website YNet reported early Wednesday, Sept. 28, 2016. He was 93. (AP Photo/Pablo Martinez Monsivais, File)

LONDON (AP) — Current and former world leaders mourned the passing of Israeli statesman Shimon Peres on Wednesday, praising him as visionary who committed his life to the elusive goal of lasting peace in the Middle East.

President Barack Obama described Peres as “soldier for Israel, for the Jewish people, for justice, for peace, and for the belief that we can be true to our best selves — to the very end of our time on Earth.”

Peres, who died early Wednesday at the age of 93, was awarded the 1994 Nobel Prize after he secretly helped broker the historic Oslo interim peace accords with the Palestinians a year earlier. He shared the prize with Israeli Prime Minister Yitzhak Rabin and Palestinian leader Yasser Arafat.

Former President Bill Clinton recalled Peres’ joy 23 years ago when he signed the Oslo Accords on the White House lawn, ushering in an optimistic moment in Israeli-Palestinian relations.

“His critics called him a dreamer. That he was — a lucid, eloquent dreamer until the very end. Thank goodness,” Clinton said in a joint statement with Democratic presidential nominee Hillary Clinton. “Let those of us who loved him and love his nation keep his dream alive.”

Peres, who served in the largely ceremonial role of president from 2007 to 2014, represented a moderate face of Israel after the more hawkish Prime Minister Benjamin Netanyahu took office in 2009. Peres sought to reassure the international community that Israel seeks peace despite stalled negotiations under Netanyahu, who said Peres “taught us never to give in to despair, but to cling to hope.”

Peres remained active at his peace center, which sponsored programs promoting Israeli-Arab coexistence, until weeks before his death.

“Though he grew older, his spirit never did,” said former British Prime Minister Tony Blair, who also worked as a Mideast peace envoy. “Above all, his commitment to peace and his belief that it was in the interests of the country he adored marked him out as a visionary.”

Peres had a major stroke two weeks ago that led to bleeding in his brain. He was sedated and on a respirator during most of his hospitalization, but his condition suddenly worsened.

Netanyahu issued a statement mourning the passing of Peres and convened his Cabinet for a special session. Preparations are underway for a funeral that many international dignitaries and leaders from around the world are expected to attend.

As political leaders lauded his courage, artists praised his grace. Singer Barbra Streisand said he had the sensibility of a “poet … thoughtful and soft-spoken, but his words echoed loudly around the world.” Israeli author Amos Oz celebrated his ability to change, from “banal hawk” in the 1970s who thought “the more land the better, the more power the better,” to an enthusiastic and stubborn believer in peace.

Tributes came from within Israel and beyond its borders, from the director-general of Israel’s military, the Mossad spy agency and from political leaders across the globe, including Australian Prime Minister Malcolm Turnbull and his Canadian counterpart Justin Trudeau.

Many of those offering condolences returned repeatedly to Peres’ optimism and hope for a better way in the Middle East.

“He told me that ‘pessimists and optimists pass away the same way. But if you leave as an optimist you have had a better life,’ ” Britain’s Foreign Secretary Boris Johnson said.

Peres’ son, Chemi, emphasized the legacy his father left behind — a legacy of looking ahead to tomorrow.

“Today we sense that the entire nation of Israel and the global community share this great loss,” he said. “We share this pain together.”
Copyright 2016 The Associated Press. All rights reserved. This material may not be published, broadcast, rewritten or redistributed.