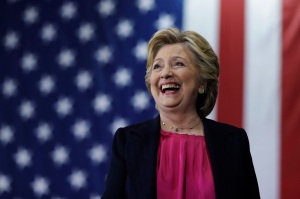 RALEIGH, N.C. (AP) — A defensive Donald Trump gave Hillary Clinton plenty of fresh material for the next phase of her presidential campaign on Tuesday, choosing to publicly reopen and relitigate some her most damaging attacks.

The day after his first general election debate, Trump blamed the moderator and a bad microphone and said he was holding back to avoid embarrassing Clinton. Next time, he threatened, he might get more personal and make a bigger political issue of former President Bill Clinton’s marital infidelities.

Things are already getting plenty personal. On Monday night, Trump brushed off Clinton’s debate claim that he’d once shamed a former Miss Universe winner for her weight. But then he dug deeper the next day — extending the controversy over what was one of his most negative debate night moments.

“She gained a massive amount of weight. It was a real problem. We had a real problem,” Trump told “Fox and Friends” about Alicia Machado, the 1996 winner of the pageant he once owned.

The comments were reminiscent of previous times when Trump has attacked private citizens in deeply personal terms. Earlier this month, he was interrupted by the pastor of a traditionally African-American church in Flint, Michigan, after breaking his agreement not to be political in his remarks. Though Trump abided by her wishes, he went after her the next morning on TV saying she was “a nervous mess” and that he thought “something was up.”

In July, Trump assailed the parents of Humayun Khan, a Muslim U.S. soldier who was killed in Iraq in 2004, after the young man’s father spoke out against the Republican at the Democratic National Convention.

“I watched her very carefully and I was also holding back,” Trump said of Clinton, reflecting on the debate at an evening rally Tuesday in Melbourne, Florida. “I didn’t want to do anything to embarrass her.”

It’s unclear whether a Trump attack on Bill Clinton’s infidelities may help or hurt his appeal.

But Trump’s latest comments about Machado were striking in that they came just as he was working to broaden his appeal among minority voters and women — key demographic groups he’s struggling to win.

“He seemed unable to handle that big stage,” said Clinton campaign chairman John Podesta. “By the end, with kind of snorting and the water gulping and leaning on the lectern that he just seemed really out of gas.”

Clinton interrupted a discussion of foreign policy in the final moments of the debate to remind viewers that Trump had called Machado “Miss Piggy” and “Miss Housekeeping.” A video featuring Machado, a Clinton supporter, was released less than two hours after the debate finished.

Aiming to capitalize on Trump’s renewed focus on a woman’s weight, Clinton’s campaign also dispatched Machado to tell reporters how she spent years struggling with eating disorders after being humiliated publicly by Trump.

Both campaigns knew the first debate, watched by some 80 million people, could mark a turning point six weeks before Election Day with Trump and Clinton locked in an exceedingly close race.

Clinton moved quickly to capitalize on her performance, launching new attacks on Trump’s failure to release his tax returns and profiting from the subprime mortgage crisis.

As Trump courted Hispanic voters in Miami, Clinton hammered on an allegation she’d leveled the night before: that he is refusing to release his returns because he goes years without paying any federal taxes. “That makes me smart,” was Trump’s coy response in the debate, but on Tuesday, Clinton insisted it was nothing to brag about.

“If not paying taxes makes him smart, what does that make all the rest of us?”

Trump’s campaign aides had worked hard in recent weeks to keep him on message — and away from personal attacks — persuading him to use teleprompters and reach out to minority audiences.

Their moderate success in scripting Trump came to a halt Tuesday. Though he insisted he’d done “very well,” Trump accused moderator Lester Holt of going harder on him than Clinton. He insisted he had “no sniffles” and no allergies despite the #snifflegate speculation that had exploded on social media. He suggested he’d been given a microphone with lower volume than Clinton’s.

Her cheerful reaction: “Anybody who complained about the microphone is not having a good night.”

The Trump campaign plans to spend $100 million on television advertising before Election Day, spokesman Jason Miller told The Associated Press. Of the $20 million in TV airtime his campaign had already scheduled, $13 million is aimed at Florida voters, according to Kantar Media’s political ad tracker.

Clinton’s campaign announced Tuesday that she had gained the support of former Virginia Sen. John Warner, a Republican who also served as Navy secretary in the 1970s. Warner is scheduled to appear at an event Wednesday in Northern Virginia with Clinton running mate — and current Virginia senator — Tim Kaine.