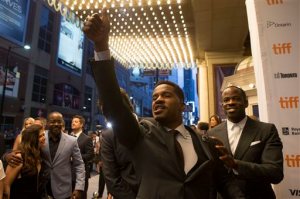 Director and actor Nate Parker, center, gestures to the crowd as he arrives on the red carpet for the film “Birth of a Nation” during the 2016 Toronto International Film Festival in Toronto on Friday, Sept. 9, 2016. (Chris Young/The Canadian Press via AP)

The year of 2016 has seen a ton of great movies already this year, but Nate Parker’s “A Birth of a Nation” remake is one of the most appreciated movies of the year. “The Birth of a Nation,” is set to release Oct. 7.

The movie is a film that tells the story of Nat Turner’s 1831 slave rebellion, a critical event in African American history. Set against the antebellum South, the movie follows Nat Turner (Nate Parker), a literate slave and preacher, whose financially strained owner, Samuel Turner (Armie Hammer), accepts an offer to use Nat’s preaching to subdue unruly slaves.

As he witnesses countless atrocities against himself and his fellow slaves, Nat orchestrates an uprising in the hopes of leading his people to freedom. Other cast members include Aunjanue Ellis, Penelope Ann Miller, Jackie Earle Haley, and Gabrielle Union.

“Birth of A Nation” takes its title from D.W. Griffith’s iconic silent film about the Civil War, a movie that both revolutionized the film industry and left a disgraceful societal legacy. Rob Young, a movie critic, said about the film “It’s the most racist movie of all time. Most of the black characters in the film are played by white actors in make-up, and are all portrayed as dumb, undisciplined, sexually lustful wild men. The climax of the film has the evil Lynch (a black character, of course) kidnapping pretty, white Elise (Lillian Gish) and planning to rape her, while at the same time, a white family is trapped in a cabin surrounded by black attackers. Everyone is rescued by Klansmen. The message Griffith intended for his film was that black people could never be integrated into proper society and would always revert to their primal nature, ruining everything.”

Alison Willmore, a BuzzFeed News film critic, said about the newest version of the film “The rebellion that was forgotten will now be remembered forever. Turner was born more than two centuries ago, but his story retains all of its urgency and fury. Parker is well-aware that when a character notes in the aftermath of the rebellion that people are getting murdered for no reason at all but being black, it’s a statement as resonant now as it was then, and through the decades in between.”

The film brought the realities of Nat Turner to life. Nat Turner was born more than two centuries ago, but his story remains relevant. Everyone should set some time aside to support Nate Parker and watch the film.