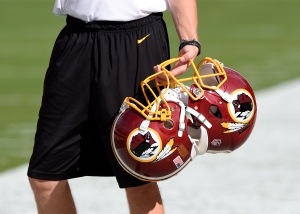 But Tam and his Asian-American rock band, The Slants, have formed an unusual alliance with the NFL franchise as they both battle the U.S. government over trademark protection for names that some consider offensive.

The Supreme Court could decide as early as this month whether to hear the dispute involving the Portland, Oregon-area band. And if the football team has its way, the justices could hear both cases in its new term.

At issue is a First Amendment challenge to a law barring the U.S. Patent and Trademark Office from registering trademarks that disparage minority groups. The office denied a trademark to the Slants in 2011 after finding the name disparaged people of Asian descent.

The Slants say their goal was not to offend anyone, but to transform a derisive term about the shape of Asian eyes into a statement of ethnic and cultural pride. The band won a major victory last year when a divided federal appeals court in Washington, D.C., ruled the law prohibiting offensive trademarks violates free-speech rights. The Obama administration has asked the Supreme Court to overturn that ruling.

The Redskins, too, say their team name is meant to honor American Indians. But the team has faced years of legal challenges, and a testy public relations fight, from members of the very group they claim to salute. The Redskins case involves the trademark office’s move last year to cancel the team trademark that was first registered in 1967. A federal judge has agreed with that decision.

A federal appeals court in Richmond, Virginia, has not yet considered the team’s appeal, but the Redskins are urging the Supreme Court not to wait. If the high court agrees to hear the Slants case, the team wants the justices to hear both disputes at the same time. Such requests to leapfrog lower courts are rarely granted.

Tam, in a legal brief, agrees that the cases should be considered together. Otherwise, he says, a future ruling against the Redskins could end up affecting the band’s status.

The legal alliance may seem surprising to anyone who has been on The Slants’ website. One section has a lengthy list of reasons why the cases are different. No. 1 is “unlike REDSKINS, THE SLANTS is not an inherent racial slur.”

The website says the word Redskin “has a long history of oppression” and “the football team treats the people as mascots.” By contrast, The Slants “breaks stereotypes about Asian-Americans, especially in the entertainment industry.”

Tam does not mention those distinctions in his brief to the court, and he declined to be interviewed.

In the Slants case, the U.S. Court of Appeals for the Federal Circuit ruled in December that the First Amendment protects “even hurtful speech that harms members of oft-stigmatized communities.”

“The First Amendment forbids government regulators to deny registration because they find the speech likely to offend others,” Judge Kimberly Moore said for the majority.

The administration argues that the law does not restrict speech because the band is still free to use the name even without trademark protection. The law “simply reflects Congress’ judgment that the federal government should not affirmatively promote the use of racial slurs and other disparaging terms by granting the benefits of registration,” the government said.

Jeremy Sheff, a professor at St. John’s University School of Law who specializes in intellectual property, said the Supreme Court could be interested in the cases because it has been “pretty aggressive” in protecting First Amendment speech — even remarks considered highly offensive.

“The knock on the law is that nobody knows what disparagement means,” he said. “That is a concern.”

The Redskins claim their case is “a better vehicle” than Tam’s for the Supreme Court to consider the constitutionality of the trademark law. The team says the effect of canceling a trademark is more harmful because it has been relying on the law’s financial protections for nearly 50 years. Without trademark protection, the team could lose millions if it can’t block the sale of counterfeit merchandise.

The team also points out that the government over the years has registered dozens of companies with names that could be considered offensive. Among those: Baked By A Negro bakery products, Midget Man condoms, Dago Swagg clothing and the rock band White Trash Cowboys.

Steve Shapiro, national legal director for the American Civil Liberties Union, said the government’s case is weak because the disparagement standard “is so vague and imprecise that it inevitably leads to arbitrary and inexplicable results.”

“The government doesn’t get to withhold a benefit because it disagrees with the content of someone’s speech,” Shapiro said.

The Redskins have come under increasing pressure in recent years to change the team name. Even President Barack Obama has said he would think about changing it if he owned the team. Owner Dan Snyder has said he’d never change the name and that it “represents honor, respect and pride.”