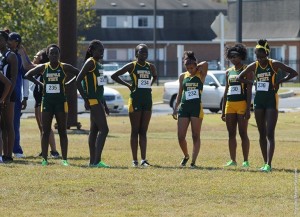 The Spartans look to improve on last season’s eighth-place finish at the MEAC Cross Country Championship.

NORFOLK, Va. – Norfolk State women’s cross country team will unveil an entirely new team when the Spartans run their first race of the season at the Maryland Eastern Shore Lid-Lifter on Saturday morning.

The Spartans look to improve on last season’s eighth-place finish at the MEAC Cross Country Championship. They will introduce an entirely new team this following the departure of several of last year’s top performers, including All-MEAC runner Rachel Webb, who graduated.

This year’s team consists of six freshmen and sophomore transfer Candice Higgins (Wiley College). Higgins provides experience to the team, as she advanced to last year’s NAIA national championship meet. Higgins was also named the Red River Athletic Conference Rookie of the Year following her fourth-place at the conference championship.

For more information on Norfolk State Athletics, please call the Office of Sports Information at (757) 823-2628, or visit the website atwww.nsuspartans.com.
Originally published at nsuspartans.com