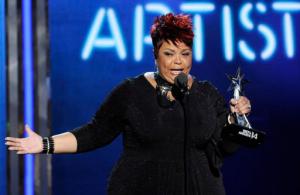 FILE – In this June 29, 2014 file photo, Tamela Mann accepts the award for best gospel artist at the BET Awards at the Nokia Theatre on in Los Angeles. Mann found comfort in her new single “God Provides” after unexpectedly hearing it for the first time on the radio shortly after she was robbed outside an Atlanta restaurant a few months ago. The song is featured on singer and actress’ fourth album, “One Way,” which also includes a guest appearance by hit-making producer Timbaland. The album is out Friday, Sept. 9, 2016. (Photo by Chris Pizzello/Invision/AP)

ATLANTA (AP) â Tamela Mann was distraught after a recent robbery, until the Grammy-nominated gospel singer unexpectedly heard her new single, “God Provides,” on the radio for first time following the incident.

“It makes me tear up thinking about it,” she recalled.

In June, Mann and her family were dining at a restaurant in Atlanta when a woman ran inside, alerting them that someone had broken into their vehicle. Her family, including her husband and fellow actor David, darted outside in an attempt to stop the robbers, but they got away.

Mann said the suspects stole her jewelry along with David’s backpack containing his computer, passport, ID card and other belongings. She said they were planning to travel to a gospel music festival in Sacramento in two days.

But without any travel documents, the singer went into a funk until she heard her song.

“It actually comforted me,” she said in a phone interview. “The lyrics were talking to me for the situation I was in. Yes, you lost something, but God said, ‘I’ll make everything just due.’ It came at the right time.”

Both ended up making the trip after David got a new passport with some unlikely help.

“A long day became a short day,” she said. “When we originally got our passports, it was in Houston, Texas. The lady who worked in the (Texas) office moved to Atlanta as a supervisor. So when David walked into the office, she recognized him and walked him right on through. How likely is that? It was really a blessing.”

“God Provides,” written by Kirk Franklin, is from Mann’s fourth album, “One Way,” out Friday. The 50-year-old singer, known for her 2012 hit “Take Me to the King,” even teamed up with hitmaker Timbaland on the album.

She sang at his wedding in 2008 and the producer attended a vow renewal ceremony in 2013 for the Manns, who have been married for nearly 30 years.

“Our two worlds came together and jelled perfectly,” she said of Timbaland, who produced her song “Through It All.”

“The idea wasn’t necessarily to crossover. But we just wanted to give a sound to encourage our young people that you can still have a good beat and still have the same message about faith.”

Mann’s singing career began with the gospel group Kirk Franklin and the Family in the 90s. Her breakthrough came after she was discovered by Tyler Perry, who casted the singer and her husband in a string of Madea feature films, stage plays and television shows, including TBS’ “Meet the Browns,” which she starred as Cora for five seasons from 2009 to 2011.

The Manns now have two other series: the BET reality show “It’s A Mann’s World” and Bounce TV’s “Mann & Wife.” The couple also has plans to release the book, “Divorce Is Not An Option,” by the end of the year.

“Even after I hear myself on the radio or see myself on TV, I’m still in awe believe it or not,” Mann said. “I feel like little ol’ me â the youngest of 14 â that God has opened doors for me.”

Follow Jonathan Landrum Jr. on Twitter: http://twitter.com/MrLandrum31
Copyright 2016 The Associated Press. All rights reserved. This material may not be published, broadcast, rewritten or redistributed.