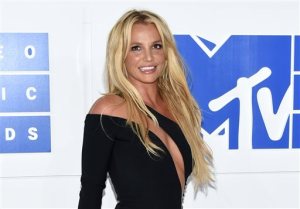 FILE – In this Aug. 28, 2016 file photo, Britney Spears arrives at the MTV Video Music Awards in New York. Los Angeles court records show Spears and her caretakers settled a long-running libel and breach-of-contract lawsuit on Friday, Sept. 2, 2016, that was filed by her former confidante Sam Lutfi against the pop singer and her parents. (Photo by Evan Agostini/Invision/AP, File)

LOS ANGELES (AP) — Britney Spears’ caretakers and her former confidante have settled a long-running lawsuit that centered on events before the pop star’s public meltdown in 2008.

Attorneys for Spears’ father, who is her conservator, filed a notice in Los Angeles Superior Court on Friday announcing the settlement with Sam Lutfi, who was Spears’ self-professed manager.

Lutfi sued Spears and her parents in 2009, claiming her father Jamie hit him in the singer’s mansion in early 2008. He also contended that a memoir by Spears’ mother, Lynne, contained libel about him.

The filing does not provide details on the settlement.

A judge in November 2012 threw out Lutfi’s claims, but an appeals court later restored the lawsuit. A trial had been scheduled for October.

The settlement was first reported by celebrity website TMZ.
Copyright 2016 The Associated Press. All rights reserved. This material may not be published, broadcast, rewritten or redistributed.