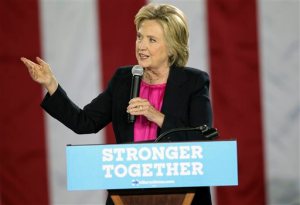 WASHINGTON (AP) — A search of thousands of emails recovered during the FBI’s investigation into Hillary Clinton’s use of a private email server has produced one previously unreleased message related to the 2012 attack on a U.S. diplomatic compound in Benghazi, Libya.

The message forwarded to Clinton in January 2013 was from Tom Shannon, then-U.S. ambassador to Brazil. The ambassador congratulated Clinton on her testimony before the Senate Foreign Relations committee about the attack, during which four Americans died.

The email was filed in court by the State Department on Wednesday as part of a lawsuit by a conservative legal advocacy group. Judicial Watch has filed numerous lawsuits seeking government documents involving the Democratic presidential nominee’s tenure as secretary of state.

The FBI recovered nearly 15,000 emails as part of its recently closed investigation that it said were not among the 55,000 pages previously provided by Clinton. She and her lawyers deleted thousands of additional emails that were described as personal and private. Some emails Clinton didn’t turn over but were recovered by the FBI from other people’s accounts were work-related.

The State Department said in court last week it had identified about 30 emails from the FBI haul that were potentially responsive to Judicial Watch’s request for messages related to the Benghazi attack. But after further review, the department said in its latest court filing that all but one of those were duplicative of emails already made public.

Shannon’s email was addressed to Clinton’s then-chief of staff, Cheryl Mills, who then forwarded it on to Clinton’s private email address.

“I watched with great admiration as she dealt with a tough and personally painful issue in a fair, candid, and determined manner,” Shannon wrote of Clinton’s Senate testimony. “I was especially impressed by her ability to turn aside the obvious efforts to politicize the events in Benghazi, reminding Americans of the tremendous sacrifice made by (U.S. ambassador to Libya) Chris Stevens and his colleagues but also insisting that our ability to play a positive role in the world and protect U.S. interests requires a willingness to take risks.”

The innocuous nature of the new Benghazi email is a setback for Republicans in Congress, who have spent years and millions in taxpayer funds on multiple investigations searching for evidence to support their claim that Clinton was negligent in her handling of the Benghazi incident. The email also does not support the supposition that Clinton and her lawyers deleted emails about Benghazi to hide evidence of wrongdoing.

The FBI in July closed the agency’s yearlong investigation into whether Clinton and her top aides mishandled classified information that flowed through the private email server located in the basement of her New York home. Though FBI Director James Comey described Clinton’s actions as “extremely careless,” he said his agents found no evidence to support criminal charges.

Republicans said Clinton lied to Congress about her handling of emails when she testified last October before a House panel investigating the Benghazi attacks. The GOP is pressing the Justice Department to open a new investigation into whether Clinton committed perjury.

Follow Michael Biesecker on Twitter: http://twitter.com/mbieseck
Copyright 2016 The Associated Press. All rights reserved. This material may not be published, broadcast, rewritten or redistributed.