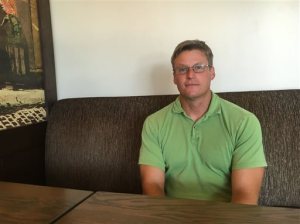 ADVANCE FOR WEEKEND EDITIONS – In this Aug. 17, 2016, photo, Keith Foster poses for a photo in Suffolk, Va. Foster wants to open a malt house in Suffolk that will process locally grown beer quality grains to sell to local breweries for a very local brew. (Victoria Bourne/The Virginian-Pilot via AP)

He’s planning to open a malt house sometime next year and has aspirations of processing locally grown, quality grains to sell to local breweries. But are folks at either end of the supply chain interested? It may take some convincing.

Foster, 44, has home brewed for years, he said. The idea to open a malt house, which is where grains are turned into malt, came to him when he and some partners were thinking about starting a brewery.

“I like the beer aspect,” Foster said. “I wanted to find something that complemented that.”

He said he became interested in the different qualities that can be achieved by experimenting with one of beer’s most fundamental elements. Malt provides not only sugar for fermentation but is also the primary source of a beer’s color, flavor and texture.

“The hard part is your supply of grain,” Foster said. Convincing farmers there is a market for it can be a challenge, he said.

No Chesapeake, Suffolk or Virginia Beach farmers are growing any of the grains — barley, wheat or rye — needed for making beer, according to local agriculture agents from the Virginia Cooperative Extension.

Marcus Williams, Suffolk’s agriculture and natural resources extension agent, said “it’s going to take a leap of faith” for farmers to take on a niche crop like barley. Most farmers focus on cash crops — corn, cotton and soybeans — he said.

Barley and wheat require some tending to, Williams said, and that might put people off. Williams is planning a demonstration plot in which he’ll sow a handful of barley varieties around late October to show farmers what it’s all about.

“It is a gamble,” he said, “people want the guessing work taken out for them.”

Shelley Barlow of Cotton Plains Farm in Chuckatuck said she and her husband, Joe, are intrigued, but they need more information.

“We are always interested in looking into alternative crops,” said Barlow, particularly if it can be profitable. She cited a recent example: a small, human-grade edible soybean they grow along with cotton and corn.

“We think we might have the right kind of equipment” for growing barley, she said. But: “We need a lot more details.”

Breweries such as Smartmouth and Bold Mariner, both in Norfolk, get their grains from BSG CraftBrewing, which buys grains from all over the world and distributes them to breweries through regional supply centers.

Porter Hardy, president of Smartmouth Brewing Co., said the majority of their grain comes from Germany. The brewery goes through roughly 3,000 pounds of it a day during summer months, he said.

He’s heard of other small-scale malt houses popping up around the country, he said.

Hardy can envision incorporating local malted grains into a specialty beer, he said.

“If we could source everything locally, that would be great,” said Michael Stacks of Bold Mariner Brewing Co.

Each ingredient lends its own characteristic to a beer, he said. The prospect of making something that is so uniquely Virginian that it becomes its own style — a Virginia pale ale, for example — is exciting, he added.

Stacks said he wouldn’t totally “jump ship” from his supplier, but could foresee producing one exclusively Virginia-sourced beer.

“I don’t know that he could provide everything that we need right away,” Stacks said.

“It’s a different type of farming, that’s for sure,” said Kvasnicka, 39, who cultivates about 300 acres — about 200 of which is barley — at his farm just south of Richmond. It takes a few extra steps from growing grain for feed and requires more management after harvest, he said. But it gives him an edge over farmers stuck in old traditions.

“The farmers can grow it,” Kvasnicka said. “They need some guarantees that they’re going to recoup their costs.”

Foster plans to have warehouse space by February or March and begin malting by May. He hopes to woo local brewers by making batches of beer that showcase the flavor and characteristics of the grain he processes. He plans to customize orders based on brewers’ feedback.

He expects to invest about $100,000 in equipment and $40,000 in his grain supply for the first year, he said. He’s looking for a boost from state and/or city programs and grants. He also expects to hire part-time help.

Suffolk has plenty of land and resources to produce beer-worthy grains, Foster said, and with so many local breweries there’s a big consumer base available in Hampton Roads.

Now he just wants to connect the dots.