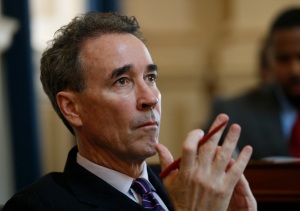 FILE- In this Jan. 20, 2015 file photo former delegate Joe Morrissey, D-Henrico, watches the proceedings during the House of Delegates session at the Capitol in Richmond, Va. A new poll shows the flamboyant former Virginia lawmaker who pleaded guilty to a misdemeanor in a sex scandal involving a 17-year-old girl, whom he later married, is the current front-runner in the race to be Richmond’s next mayor. (AP Photo/Steve Helber, File)

RICHMOND, Va. (AP) — A flamboyant former Virginia lawmaker who was jailed in a sex scandal involving a 17-year-old girl is the current front-runner in the crowded race for Richmond mayor, a new poll shows.

The poll from Christopher Newport University says Joseph Morrissey has support from 28 percent of the city’s voters, putting him far ahead of seven other candidates.

Morrissey holds a large advantage in three of the city’s nine precincts. He must win a majority in five of them to avoid a runoff election.

CNU professor Quentin Kidd said the real contest looks to be for second place behind Morrissey if he fails to win the election outright, setting up a runoff election.

Other candidates include Jack Berry, who runs an economic development organization, and Levar Stoney, the former Virginia secretary of the commonwealth who has close ties to Gov. Terry McAuliffe.

Morrissey has long been one of the most colorful politicians in Virginia. Last year he spent his days at the General Assembly last year and his nights in jail after he entered an Alford plea to a misdemeanor for contributing to the delinquency of a minor. In an Alford plea, a defendant acknowledges there is sufficient evidence for a conviction but doesn’t admit guilt.

Morrissey later married the woman, and they have two children.

Morrissey, who is white, has positioned himself as a champion of Richmond’s lower-income population, which is largely black. A former boxer, Morrissey has long cultivated a “fighting Joe” image as a lawyer in a career marked by fistfights, contempt of court citations and the loss and reinstatement of his law license.

The poll of 600 Richmond registered voters was conducted Aug. 18-24 by the Wason Center for Public Policy at CNU and has a margin of error of 4.9 percent.